You Are Never Too Old To Try Something New 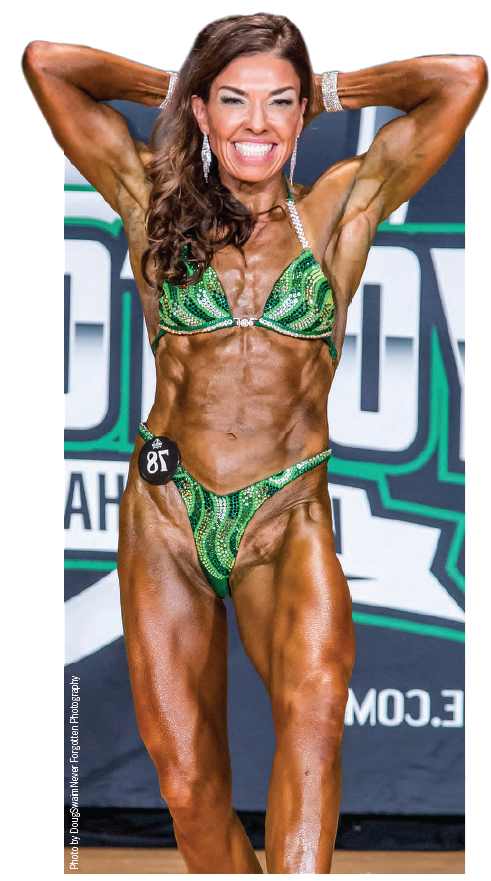 At a Glance: Nancy Lux

Favorite Fitness Meal: Chicken and rice with avocado and a sprinkle of cayenne pepper and salt (both help me drink more water) plus a square of 86% intense dark chocolate.

Favorite Beverly Supplements:  Multiple Enzyme Complex with each meal as digestive enzymes decrease as we age; PBP (Plant-Based Protein) at least one scoop daily mid-morning or when hungry; 1-2 scoops Glutamine Select before and after training to flood my system with amino acids; and 7-Keto MuscLean/Lean Out stack – 3 caps of 7-Keto MuscLean and 2 Lean Out upon waking and again before training to maximize fat loss when contest prepping.

What would you recommend to someone who has never used Beverly supplements before? Make sure you are getting enough protein and choose one of Beverly's fine protein products to meet your protein goals. I choose PBP since I have eliminated dairy, but I have used UMP and Muscle Provider, which are excellent protein sources.

Words to live by: You are never too old, and it is never too late to try something new.

People are often surprised to learn I am 55 years old and a competitive bodybuilder. I usually explain that I am a latecomer to the sport but have been a lifelong athlete. I started as a runner in middle school and high school and then college. I was a middle-distance runner and decent at it. After graduating college with an accounting degree, I was a busy CPA living in the Midwest and did not have a lot of spare time for athletic pursuits. Still, I kept in shape by running, swimming, or occasionally riding a bicycle. Then I moved to the mountains of western North Carolina in the late 1990s and joined a gym where I started to weight train. I remember doing the "Body For Life" Challenge that was popular at the time. I did cardio and weights on alternating days and loosely followed the meal plan, and while I looked pretty good, I never achieved the Rachel McLish, Cory Everson, or Monica Brandt look that I desired.

I began riding road bicycles with a local group about that time. We had a mock World Championship race every Tuesday night. Then, one day I decided to do an actual race. Soon I was hooked on bicycle racing, became serious, and even had a cycling coach. Weight training was an integral part of my winter training. I lifted as heavy as I could, with a big emphasis on heavy squats and leg presses.

Every year I wrote goals for the season. And one of my noncycling goals that showed up year after year was to "Have a Monica Brandt Physique." Of course, I didn't achieve that physique while racing bikes, but I did rise quickly through the racing categories and became a Category 1 road and track cyclist, and competed at the elite and masters levels. I won 7 Masters National Track Titles and was runner up twice at Elite Track Nationals during my bicycle racing career.

Then in 2008, during a stressful time of my life, I was getting in hours on the bike, weight training, and working as a CPA in the middle of tax season. My body revolted with incredible swelling in my knees and a diagnosis of RA (Rheumatoid Arthritis). I was shocked and scared I would never train or race again. Luckily, I got it under control within a year with medication, but it ended my bike racing career.

While waiting and hoping that my RA would go into remission, I kept busy with all kinds of activities, including showing cats at cat shows and sewing crafts to raise money for my local animal shelter. I did bodyweight-type workouts for several years and occasionally went to the local gym for a morning boot camp class. Finally, my RA was in remission, and I felt that competitive "bug" again. I was now 50 years old and realized I still had that unfulfilled goal of achieving a "Monica Brandt Physique" and doing a bodybuilding competition.

It was January 2017. I looked "fit" and had some muscle, but I knew I would need some help if I was going to compete. I contacted Anthony Tiller, owner of Underdog Performance Training and Fitness, Inc. Anthony assessed my physique, put me on a training plan, and set my macros with the goal of a June 2017 show. My body responded quickly, and I was ready early (12 weeks into prep). Ironically, a small natural bodybuilding federation hosted a show in Franklin, NC, just 45 minutes from my house. I entered the old school women's bodybuilding division, just like my idols from the 1990s. My routine consisted of pure bodybuilding poses performed in the classic manner. I was a nervous wreck on stage, then I heard a stranger going nuts cheering for me in the audience, and it put a huge smile on my face. At that moment, I fell in love with being on stage and knew I wanted more. I was the only entrant in women's bodybuilding, so by default, I won.

I met John Lankford at the show, the promotor of the Carolina Supernatural Show, and a Beverly ambassador. John had been featured in Beverly's No Nonsense Magazine and introduced me to Beverly International supplements. As a 100% all-natural athlete, I always look for quality products that provide results. I researched the products online and started using UMP protein powder, Glutamine Select, plus the 7-Keto/Lean Out stack. In June 2017, I competed in the SNBF Carolina Supernatural, and I won the whole thing! I won my class and the overall in women's bodybuilding, my pro card in the SNBF, and the best poser award. I became hooked on the sport and the friends I was making. It was like no other sport in which I competed because, to my complete surprise, everyone was supportive, helpful, and friendly.

In late 2018, I competed in Women's Physique for the first time. I love the beautiful posing style in Women's Physique. I won my class and qualified for an NPC national level show in 2019. I competed at the national show but, as a natural athlete, did not have the mass required to be competitive; plus, I had overdone cardio in my prep. Some women may need a lot of cardio, but I learned that excessive cardio combined with a prolonged deficit diet resulted in muscle loss. I ended 2019 upset with my results but ready for a long break. And then we all got a long break in 2020 when COVID hit, and shows were canceled all year. I was fortunate to have access to a home gym and stayed consistent with my training, diet, and supplement programs throughout the year. I always tell people consistency, not perfection, with training and diet is key!

In 2021, I set my goal to earn my pro card at the OCB Jack Kings Classic in April, then make my pro debut at the Yorton Cup in October 2021 in Pittsburgh. I enlisted the help of Terri McBee of Team Hardbody Coaching to help me dial in a diet and cardio regimen that would help me maintain mass yet lose the fat I needed to be stage-ready. I refer to this prep as "the best prep ever." It was slow and steady, and cardio was kept to just the right amount so that my body was never overly stressed. I followed an IIFYM style nutrition plan and was consistent with the Beverly supplements that work for me. On show day, I shined, and I felt fantastic. Everything had gone perfectly in my prep. In the Pro Women's Physique Division, I won my class B (the tall class) and came in second overall at the Yorton Cup.

While I follow an IIFYM approach year-round, I eat clean 80% of the time during the off-season yet splurge with a high-carb Saturday of pizza and wine. My daily calories in the off-season are in the 2,300 Kcal range, and my Carb/Protein/Fat percentages are typically 40/30/30. My protein intake is the same year-round, both off-season and contest prep, at about 1.1 to 1.2 grams per pound of bodyweight. (Note that I weigh my protein in ounces but all my other foods in grams).

For contest prep, I buckle down and gradually drop my carbohydrate and fat intake each week. My Carb/Protein/Fat percentages are more like 40/35/25 a few weeks out from a contest then 40/40/20 right before a contest.

A typical meal plan for me close to a contest date looks something like this: (about 1650 Kcal and 40/40/20 Carb/Protein/Fat)

Prep Tips: I prepare enough food for several meals when I cook. I make sure that I have food cooked for the next day. I cook enough rice to last several days in a large rice cooker. I bake 4-5 sweet potatoes at a time and at least 2 pounds of chicken breasts, so I have plenty for all my meals.

I take the Beverly basics year-round for muscle retention, strength, and digestive support. I add the contest prep supplements to the basics about 12 weeks from a contest. 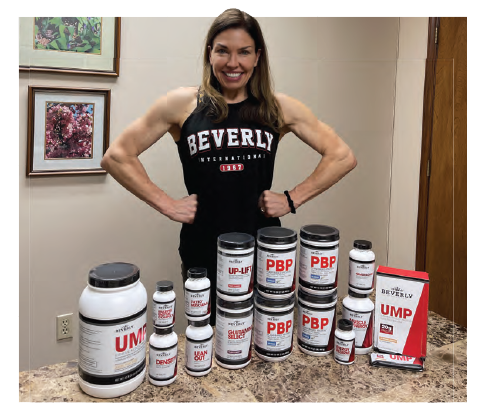 I often go outside for a nice, easy ride around town on my road bike in the off-season. I do this without trying to accomplish any heart rate or interval goals, and it's just for fun with my spouse and to be active. During contest prep, my cardio builds to a maximum of 30 minutes of HIIT 3 times a week. I like HIIT cardio because it is fast, effective, and does not require hours of slogging away at cardio.

I want to emphasize that you need to find cardio that is enjoyable and fun. For me, that is HIIT cardio on a bike trainer combined with a post-workout stress-relieving walk if possible.

My training advice is to always lift as heavy as you can for the rep range you are aiming for so that the last two reps are challenging. My training doesn't vary too much in the off-season compared to competition mode. The biggest thing that changes for me during contest prep is my diet and slowly adding in more cardio time.

My current training routine focuses on building all muscle groups, and I am trying very specifically to focus on a mind/muscle connection and get into the muscle fibers.

(Note I always do a light warm-up of 5 minutes on the elliptical or just a simple overall bodyweight movement series with squats, lunges, push-ups, and arm swings for 5 minutes.)

On exercises with an asterisk (*), add weight to each set while decreasing reps.

Every person needs to learn their body and pay attention to what works for them. We are all unique, and the key is to find the food, supplements, and training that maximizes your potential. Based on food sensitivity testing, I personally avoid wheat, gluten, dairy, eggs, almonds, and several other foods. Avoiding these foods has made a dramatic difference in my digestion and physique. I also work hard to manage my RA and arthritis. The best remedy is staying active, maintaining a healthy diet and weight in the off-season, and stretching. I believe the fountain of youth can be found in lifting weights and staying active, eating nutritious real food, taking quality supplements, and having a healthy, positive mindset. Keep Pushing!