By: The Beverly Advisor Team 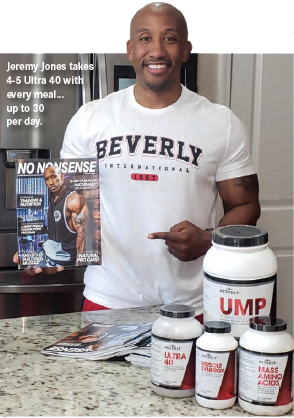 Everyone’s looking for an edge. Sure, a few modern-day supplement discoveries have provided incredible boosts for today’s bodybuilders, creatine for example, but if you constantly search for the silver bullet supplement, you’ll only wind up with holes in your wallet. Years of experience have revealed a few time-tested basics of good bodybuilding nutrition. Knowing about protein and aminos is common knowledge, but there’s another equally powerful, although less popular supplement, known as desiccated liver – AND strength, size, and endurance all typically increase after adding a quality desiccated liver supplement to your diet.

Liver tablets have been a mainstay of bodybuilding almost as long as the sport itself has existed. Stories from the old timers are filled with examples of phenomenal gains they made on liver tablets. This is still one of the most potent training aids a bodybuilder can use.

The Most Underutilized Tool In Muscle Building

The nutritional tool overlooked by so many is a specific formulation of amino acids. Dr. Eric Serrano MD, one of the few, unbiased experts on the topic (as in no financial ties to a supplement company) put it best when he stated, "Amino acid formulations are the most under utilized tools available to the bodybuilding community." Scientific research has demonstrated that athletes under severe stress, (hard exercise, weight training, even trauma) can benefit from the peptide bonded amino acids because they are up to 16 times more effective for repair than whole food sources. Yes, 16 times more effective!

It was 1951 when Dr. B.H. Ershoff took three groups of lab rats and fed them controlled diets for a twelve-week period. Group one ate a basic diet fortified with vitamins and minerals. Group two ate as much as they wanted of the same diet plus B vitamins and brewer's yeast. Group three ate the basic diet but had 10% desiccated liver added to their rations. Then the doctor placed the rats one by one into a drum of water, out of which they could not climb. Therefore, it was either swim or drown. The rats in Group One swam an average of 13.2 minutes, Group Two, an average of 13.4 minutes. When the experiment finally was concluded…Group Three rates were still swimming! Group Three swam almost 10 times as long. No other supplement we know has even come close to liver for improving endurance. Since then the reports of people whose strength, muscle mass and endurance have skyrocketed (since using desiccated liver) have been as countless as the stars in the sky.

Not all desiccated liver is what it says it is. When Beverly set out to formulate our liver supplement, Ultra 40, we had to improve upon an already proven winner. We started with the “best of the best” - the highest grade AAA purified Argentinean liver concentrate. Why?

The Argentine government will not allow their beef herds to be contaminated with DES steroids, growth hormone or pesticides. Back before steroids, bodybuilders were taking 7.5 or 10-grain tablets and swallowing 1000 tablets a week was very common, (that’s 100 plus a day!). So our next move was to use technology to increase the potency packed into every tablet, because no-one wants to swallow 100 pills a day! Then we worked until we had a formula that contains only trace amounts of fat and cholesterol. What we created had FORTY-FIVE TIMES THE NUTRITIONAL VALUE of whole beef liver AND all the nutrients and enzymes of raw liver, PLUS - all the essential amino acids to pack on muscle - but none of the toxins or fats found in whole beef.

A plethora of nutritional factors occur naturally in liver:

How Ultra 40 Will Work For You...
Beverly’s Success Formula

A secret at Beverly International that produces more champions than anything we’ve seen is definitely the combination of taking Ultra 40 Tablets and Mass (our amino acid tablets) at each meal. The addition of only four Ultra 40 tablets and four Mass tablets per meal for five meals per day can make a tremendous difference in your physique.

This simple-but-effective supplement program will add up to sixty-five grams of the highest quality protein to your daily intake. The addition of this protein at each meal can have a very positive effect on your hormonal response to eating (more muscle building and fat burning hormones; and less fat storing hormones are produced). Over three months time you will have ingested almost 6000 grams of additional protein, and 24,000 calories of the highest quality nutrients available.

Since it takes approximately 3500 additional calories to gain one pound of bodyweight, dividing 24,000 by 3500 results in a net gain of approximately seven pounds more than if you hadn't taken the Ultra 40 and Mass. It’s no wonder Beverly clients who compete naturally are coming into their contests leaner, yet 5 - 10 pounds heavier than before taking Mass and Ultra 40!

Here’s How to Take Ultra 40 For Best Results

Advanced muscle-building tip: also a favorite trick of Vince Gironda. Take 2-4 Ultra 40 liver tablets and 2-4 Mass peptide-bonded amino acid tablets on the hour (or even every half hour) throughout the day. Clients have reported muscle gains of 1-2 lbs a week using this method.

These amounts allow you to take in tremendous amounts of protein and nutrients without large amounts of food. You should build up gradually to this amount to avoid upsetting your digestion. While desiccated liver is not considered the cure-all it once was by bodybuilders, it has proved time and again invaluable in breaking through those sticking points in your strength as well as contributing to improved energy flow on a restricted diet. In short, Ultra 40 delivers results.

You know to build muscle it’s imperative that you intensify your rep and set efforts in the gym. But it’s truly the other 23 hours of nutrient loading outside the gym that determines whether or not you’ll make the gains you’re after. If you’re seriously interested in getting the most out of your training stick with the basics of good bodybuilding nutrition and that means Ultra 40.

Ultra 40 is the staple of any good nutrition program and with 500 per jar; you just can’t find a better value…ALL WITH GUARANTEED RESULTS! For added recovery, increased strength, and increases in lean muscle mass, call today and try Ultra 40 for yourself at
800-781-3475.