The Bodybuilding Lifestyle - A Positive Force for Good in my Life 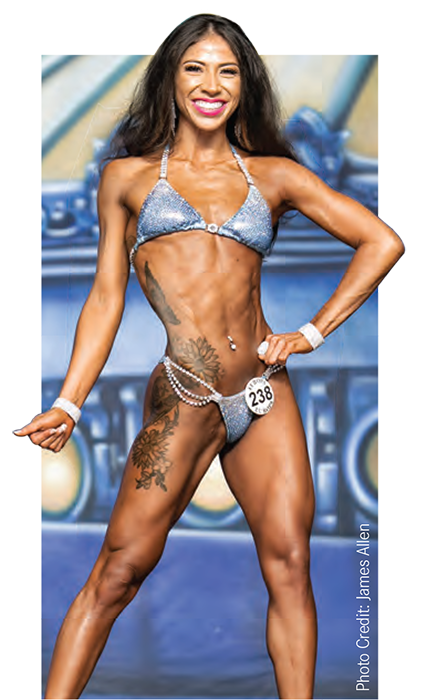 At a Glance: Celeste Solis

Education: BA in Psychology from University of Texas Permian Basin

Favorite Supplements: Graham Cracker UMP- I use it for anything from shakes to making protein muffins. I also enjoy the Glutamine Select during my workouts.

What would you recommend to someone who has never used Beverly Supplements before? If they are new to training, I would recommend starting with UMP, Mass Aminos combined with Ultra-40. This is what I started with when I began using Beverly and I saw drastic improvements in my physique and performance in the gym.

Music: Depending on how I feel I typically go with Hip-Hop, Alternative Rock or EDM.

Most Inspiring Book: The Power of Now by Eckhart Tolle

Words to live by: “The power for creating a better future is contained in the present moment: you create a good future by creating a good present.” - Eckhart Tolle

I have always enjoyed physical activity and competitive sports. I started playing T-Ball at age 5 and played catcher throughout my childhood. Once in Junior High, I participated in volleyball, basketball, cross-country, track & field, and cheerleading. I continued to participate in volleyball and cheerleading throughout high school, where I graduated in the top of my class at Permian High School in Odessa, TX.

After high school, my activity level began to slow down. The environment and relationships I developed at this time had a negative impact on both my physical and emotional wellbeing. I was living a harmful lifestyle indulging in alcohol and drugs. My life had become filled with toxic relationships, chronic stress, anxiety, and depression. My weight ballooned up by 35 pounds. During my junior year of college I was prescribed Xanax and anti-depressants.

It was in August of 2013, after a night of excessive partying, that I began making a turn for the better. I realized that I was in an unhappy relationship, not just with those around me, but with myself. I began changing my diet, eliminating processed carbohydrates and sugar and eating smaller, more frequent meals. I started working out with the Insanity program in my kitchen in the mornings before classes or work. Despite the physical improvements I had made, I was still lacking in how to properly diet and train for the goals I wanted to achieve. I had become skinny, but with little to no muscle tone and was unsure of how to take my physique to the next level.

I began working on my certification as a Personal Trainer. In February of 2014, I began working at a local gym here in Odessa. I felt blessed having the opportunity to help others improve their daily lives with physical fitness. Slowly, I began building a client base for my personal training services while still attending college and working as a server at Saltgrass Steakhouse. I realized that helping others had become my passion and when my client base became large enough, I quit my serving job and decided to focus all of my efforts on personal training and graduating from college.

Working within the Odessa fitness industry introduced me to many people with similar interests and goals regarding health and fitness. One of those people was Clint Gillispie. We began working together at Anytime Fitness in July of 2016, where I oversaw the personal training program at the club. A year later, I became co-owner, with Clint, of Anytime Fitness Odessa. Our business partnership eventually turned into a romantic relationship and we became inseparable. We began working together on developing our PT program and opening additional Anytime Fitness locations in the Permian Basin. This loving and healthy relationship has been such a blessing! It was at Anytime Fitness that I was introduced to Beverly International products. Clint, along with his father, had both been long time advocates and users of Beverly products. 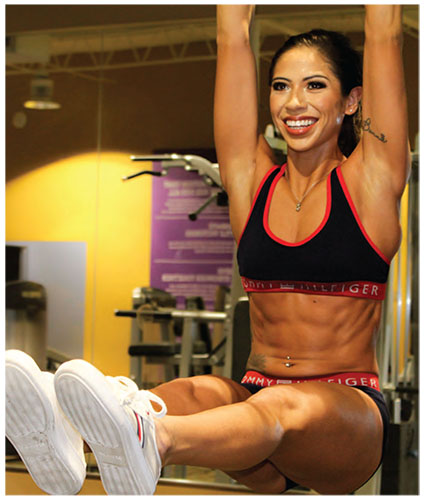 After graduating from college in May 2017, I decided to compete in my first bikini contest. Clint and I sat down and put together a regimen that I would follow all the way up to my first show in November of 2017. (For a look at my exact programs, see the diets, supplements, and training sections of this article). It was also at this time that we reached out to Julie Lohre to help me with my bikini prep. She provided me with an incredible amount of advice and inspiration leading up to show day. I competed at the Lackland Classic in San Antonio, TX where I placed first in the Class D Novice and fourth in the Class D Open. After the show, I realized that I was hooked and that the bodybuilding lifestyle was something that helps me cope with life’s challenges and allows me to focus all of my energy on something that is positive and fulfilling. I competed in my second show in June of 2018 at the Dallas Europa Games where I placed third in Open Bikini Class D. Despite finishing third, it was gratifying to see the improvements that I made in such a short amount of time. I have no doubt that my gains and improvements would have been severely limited without the use of Beverly International supplements.

Meal 4: UMP a couple of hours before training with 1/4 cup oatmeal or a banana

I take Super Pak every morning upon waking. Creatine Select and Up-Lift are taken before workouts. Glutamine Select is taken during workouts. (4) Mass Aminos and (4) Ultra-40 are taken with meals 1, 3 and 6.

Meal 3: 6oz grilled chicken or tilapia, 2 cups steamed vegetables. I include a sweet potato or jasmine rice on leg days.

I keep my cardio to a minimum during the off-season. Every Monday I coach a track session at the local college where I run with my clients. Other than that, I typically use my diet to bring my bodyfat down for a contest. I am naturally lean and struggle with adding and maintaining muscle. I find that keeping cardio to a minimum and taking 15 Density a day helps me maintain as much muscle as possible while dieting for a show.

No one can stop you from becoming your best self and having the life you want but you. Your self-worth begins inside you. I believe the mind and body are intrinsically connected and that positive thoughts and actions influence your physical, spiritual and emotional health. Beverly International athletes prove that your goals can be achieved with consistent exercise, training, a healthy diet and quality supplements. Nobody can teach you to have discipline and will power. That is something only you can create.

Health and Fitness saved me from destructive behaviors while helping me learn to love myself and others. It inspired me to live my purpose by helping others achieve their goals, while also pursuing my own. Establishing a healthier routine helped me manage my anxiety and depression symptoms. I was able to come off all of my medications and my mood and life improved significantly. Every once in a while, my anxiety will creep in, but the severity is nowhere near what it used to be. I love the life I live and I am proud of who I am. I’ve come so far!