The Beverly Brick Road - Step by Step to Contest Success 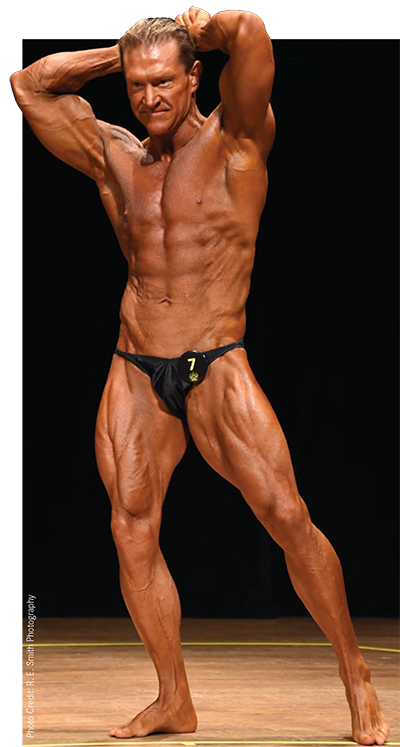 At a Glance: Michael Smith

What would you recommend to someone who has never used Beverly supplements before? I highly recommend the UMP Chocolate. As soon as you taste it, you are going to be hooked, not to mention you’re getting 20g of protein and only 4 carbohydrates per scoop. That is a win win!

Hobby and Interests: Watching UFC with friends and family

Words to live by: Give 110 percent to anything that has your name on it.

In college, my studies took up much of my time and working out became a lesser priority. After college, I caught the money fever and making money was my new objective. Working late hours and weekends was the norm. Bodybuilding took a further step back on the burner and any thoughts of competing were fast fading. This trend continued from age 21 to 37, so 16 years had passed and still no competition in sight. Then one day I learned that a long-time friend, who was the same age as me, had a heart attack at work and passed away on the spot. Two months after that event my father was hospitalized with cirrhosis of the liver (from years of drinking) and Hospice came to his home. He died in front of my eyes a week later. At that point I no longer felt that I had plenty of time left in my life to do all the things that I had been putting off.

So, at 37 I started making some life changes. One thing I knew, if I was ever going to do a bodybuilding show, I needed to get started on it, NOW. And that’s what I did. I picked a show that was only 3 months away and immediately started my diet and cardio. Three months later I had lost 46 pounds (210lb to 164lb) and entered the open middleweight class. There were 12 competitors in my class and they broke us up into 3 groups during pre-judging, I wasn’t called for either the 1st or 2nd group. I thought, “There has to be a mistake, I did 2 hours of cardio a day, lost 46 pounds, and was here to honor those that had fallen in my life.” The night show came and the top 5 were awarded with trophies. Needless to say, I was not one of them! In fact, I was 12th out of 12. (Dead last!) That was my introduction to the world of bodybuilding competition. It also served as a wakeup call.

My introduction to Beverly International:

With my very disturbing dead last finish at my first show fresh in my mind, I realized I had the will power and desire, but not the “know how” or “knowledge” of contest preparation. At this point I felt a lot like Dorothy in “The Wizard of Oz”. I realized that although I was not in Kansas, I was in a place just as unfamiliar. Working out, hours of cardio, and limited calories would not make me a successful bodybuilder. I needed guidance, but where should I turn? Once my fellow gym goers learned that I had competed, it seemed that every one of them was giving me advice, each person contradicting the other. Adding Google and YouTube to the mix quickly put my mind in overload.

Then, almost magically, a road appeared. I call it the Beverly Brick Road.

I still remember Googling “Contest Prep” more than 10 years ago and coming across Beverly’s articles “16 Weeks Out Contest Count Down” and “8 Weeks Out Contest Count Down”, by Roger and Sandy Riedinger. I saw right away that these articles were actual roadmaps of how to get from here (12th place out of 12) to there (top 3 or better). In these articles was an answer to every question I had.

So just like “The Wizard of Oz” theme, I was given a road to follow. I printed out the articles, laminated them, and put them into a binder that I referred to over and over. My next show was exactly 17 weeks away. Just enough time to follow the guidelines exactly as written. I ordered the recommended Beverly supplements, UMP Chocolate, Creatine Select, and Lean Out and at 16 weeks out started the program just as it was written.

The program had me hold off on cardio until closer to the show and everyone kept telling me I needed to do it now. But I reminded myself that I needed to stay on the Beverly road. I had followed my own road before and knew where that ended. During the 16 weeks, I kept getting bigger AND leaner, and now those same gym gurus who were telling me what I should do were now asking me what I was doing to get so cut and lean. I would tell them to go to Beverly’s website and download the article. And don’t forget the recommended “Beverly” supplements. (Other supplement brands are not the same.)

Finally, it was Showtime. Pre-judging was once again very deep in competitors, there were 20 in my class to be exact. I started to get that same feeling as the first show (failure and stress), and the next thing I know they are calling my number out with the first group of competitors. When the night show starts they brought me out with the top 5 to receive awards. I knew that at least I got 5th place and felt very pleased that this time I would be getting something for my effort. Then they handed out the 5th place award and it wasn’t me. Well, 4th is better than 5th! After they awarded 3rd place, I looked down at my competitor number wondering if they had already called it and I just didn’t hear it. Then they called 2nd and it still wasn’t me. By this time I was really nervous, I was the only one left in line. Then they called my number. I had won, first place out of 20!

Since then I’ve gone on for 10 years, doing 2 or 3 shows a year, almost always coming in 1st or 2nd and even a few overalls. I was able to achieve my bodybuilding goals because I followed Beverly’s guidelines and supplement programs. I followed what I call, “The Beverly Brick Road”! 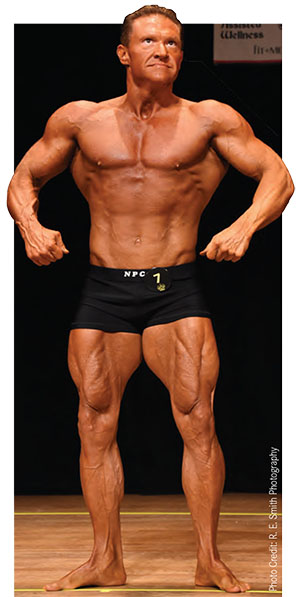 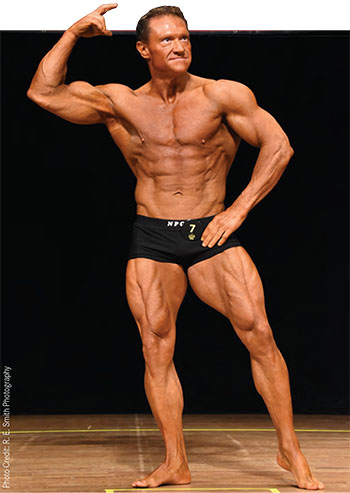 Meal 6: Protein Shake or Pudding: 2 Scoops UMP, add enough water to make a shake or pudding the consistency you desire

As the contest approaches I modify the above plan into 4-week phases as follows.

From weeks 12-9 I alternate red meat one day with ground turkey the next, and start cutting down a little on the complex carbs.

Weeks 8-5 I drop the egg yolks, eat red meat one day, ground turkey the next, and grilled chicken the third, while reducing the complex carbs further

Sample Plan for the Final 4 Weeks:

Meal 2 (Post-Workout): 2 scoops UMP; I like the strawberry and chocolate flavors best

Lean Out – Starting at 8 weeks out from contest, 4 capsules per day (to lose that last bit of fat)

In the off season I rotate upper body, lower body, off day - then repeat, sticking with 8-15 reps. At 16 weeks out from a show I up the intensity.

I have a full gym setup at home even though I also work out in a standard gym. The closer I get to the show I like to work out at home so I can flex and pose in the mirror between sets. I feel this allows me to see my striations and hardens me up while at the same time I’m training the muscles to pose on command.

Below is the Beverly International Contest Countdown – 16 Weeks Out Training program which I mentioned earlier.

In this program you’ll use two basic progression schemes:

(Exercises using the Pyramid system are marked with *.)

2. Double Progressive System: Use the same weight for all Start at the low end of the suggested rep range. Gradually increase the repetitions, usually adding one rep each week until you reach the top number of suggested reps for each set of a particular exercise. Then add weight and start over at the lower end of the rep scheme.

(Exercises below where you should use the Double Progressive System are marked **.)

I start at 8 weeks out with 20 minutes on the elliptical machine, 4-5 days a week. Every 2 weeks I increase the time by 10 minutes until the week of the contest.

I begin working on my posing routine at 8 weeks out. The best tip I can give you on presentation is to practice and practice some more. I put my posing music in a loop with a break song in between. I let the loop play over and over; I do my routine, set myself back up during the break song, and then do it again, again, and again. It is sometimes easy to lose track of time and I’ve found myself practicing a routine for up to 2 hours without realizing how much time had passed. This type of practicing is a sure cure for stage jitters. It makes your presentation second nature when you take the stage.

The biggest mistake that competitors make is their refusal to reduce their carb intake as a contest approaches. They are dead set against sacrificing size for definition. I’ve literally pleaded with clients and friends to stick with their diet plan, but as soon as they start to lose a small amount of size they panic. That’s their excuse to add carbs. Consequently, they place 4th or 5th in their show and blame the judges. I personally follow the nutrition program in Beverly’s Contest Countdown at 16 weeks out article on the BeverlyInternational.com website and end up winning my class and sometimes an overall at the same show. Tip: Follow Beverly’s Contest Countdown Plan and use their products in the recommended manner because it works. Period.