Swolemates at the Gym and Trophies on the Stage

At a Glance: Sharlyn Hampton

Favorite Fitness Meal: UMP protein pancakes. The pancakes taste great with every flavor of Beverly UMP protein. I prepare them for breakfast as well as an on the go snack. Hot or cold it’s a perfect replacement meal.

Favorite Supplements: Graham Cracker UMP- I use it for anything from shakes to making protein muffins. I also enjoy the Glutamine Select during my workouts.

What would you recommend to someone who has never used Beverly supplements before? I’ve sampled various protein powder supplements and Beverly UMP has been the best. The flavors taste great and UMP blends very well with fruit and oats.

Hobby or Interests outside bodybuilding: Because of my midwestern United States and Turkish roots, I enjoy trying new foods. I am passionate about bodybuilding so when I’m not working out, I’m helping someone else achieve their fitness goal. I enjoy spending time at home, watching movies, and binge watching Netflix. Spending time with family and friends is essential.

Words to live by: YOU vs YOU. Everything we do begins and ends with how we start our day. The mental mindset that we initiate and continue to maintain, is the foundation of the goal that we want to accomplish. It starts with YOU and ends with YOU..

What are the greatest things you have to overcome to be a champion? Training harder? Avoiding the sweet foods you crave? Living the right athletic mindset? Rather than focusing on the things she has been forced to go without, or her daily life challenges, for IFBB Pro Sharlyn Hampton, becoming a champion is simply an effect of going for what she enjoys...training hard, eating properly, consuming the best nutrition supplements, posing artistically onstage, and creating the best physique possible.

While her win at the NPC Universe (capturing the open class and the masters 35-and-over) gave her a pro card, her densely-built, aesthetically-shaped, athletically beautiful female physique was a primary goal in her life.

Sharlyn was born a military brat in Germany, where her father worked in the Army. Later in life, she spent much of her time in the St. Louis, MO area, where her father’s family is based. Her father always took her older brother to compete in sports. One summer, he noticed girls playing basketball and had her join up. Basketball and soccer became regular sports that she competed in, playing basketball all the way into college. She was introduced to lifting weights by her high school basketball coach, Theresa Humble. From her freshman year on, she was hooked on weight lifting.

After studying exercise, nutrition and health sciences at Chicago’s Robert Morris University, Sharlyn worked as a government contractor in Iraq for three years. She was a supervisor for a contracting company called KBR (Brown & Root Industrial Services) in morale, welfare and recreation. This included working in the gyms and rec centers that the soldiers used for training. While she enjoyed helping soldiers with lifting, there was another aspect of her job that was very stressful. Over the three years she was employed there, attacks with explosives were launched numerous times on the facilities. She consistently had to run from her bunker to nearby safety zones. “There were some soldiers that I would see on a regular basis in the gym and they would go outside of the wire and some of them would not come back.” This was very important work, but difficult to handle for long periods. Post-traumatic stress disorder (PTSD) was a concern which she realized after leaving that job and returning to Chicago. “In the morning, I would wake–up and just automatically roll underneath my bed. That was one of the things we did regularly in Iraq when we’d hear a loud noise indicating that our base was being hit and there was not enough time to get down to the bunker.”

Sharlyn worked as a personal trainer while going through the training and hiring process to join the police department. The gym always helped her to relax her mind and soul. She still works part–time as a personal trainer and her own gym time is a major part of her life. “The gym is an area which is totally in my control. Certain situations I have been in as a police officer or my work overseas were not always under my control. Bodybuilding is just something I am completely in control of and a stress reliever.”

It was around 2006 that Sharlyn was pulled into the contest prep world. “When I became a personal trainer, about 4–5 of the other trainers were competing in bodybuilding and I just jumped on the bandwagon.” Her first contest (of about nine shows) was in the lightweight bodybuilding category at the NPC Caveman Classic in St. Louis, which she won. This was followed by another victory at the NPC Illinois show.

After taking a few years off from competing, she entered the 2012 NPC Muscle Heat in Greensboro, North Carolina. It was her first time in the new Women’s Physique division, and she won the overall! She took off a few more years in order to go through the academy training for her new police career, but returned and took 2nd place in Physique at the 2016 Chicago Wings of Strength Extravaganza.

“Later that year, I went into a national show and didn’t do that well,” says Sharlyn. ”I entered the Women’s Physique category and a couple of the judges told me, ’I know you have a bodybuilder’s mentality, but you definitely have a figure girl’s body. If you’d stepped onstage as a figure girl, you would have had a pro card years ago.’” While the bodybuilding and women’s physique divisions motivated her, she realizes that going into bodybuilding instead of figure with her build “was like taking a knife to a gun show.”

Sharlyn jumped into three figure contests this year. The first one was an overall victory at the NPC Michigan. A week later she hit third place in the NPC Junior Nationals. A week after that was when she captured her pro card at the NPC Universe with multiple class wins, including the overall in the over–40 class. “The thing I liked most was that I was in the open class with the younger girls and I won my class there too. Winning was absolutely amazing. It was almost like an out–of–body experience. The competitors made it so amazing back stage – everyone helping one other.”

She felt she had finally reached her best condition. Trainer Shelby Starnes jumped in to assist her just a few weeks before these three contests. “The difference Shelby made was he had me eating a lot more carbs than before. I would send him my morning pictures and he would tell me to eat more carbs. Your body can take more carbs. Keep eating!” This helped her have the slightly more “rounded” look required for high level figure competition.

In 2019, Sharlyn Hampton plans to enter her hometown’s Wings of Strength Chicago Pro for her pro debut. I also had to ask what her lifetime bodybuilding goal will be. “I want to step on the Olympia stage in Vegas. That might be a far out dream considering I am in my 40s, but I want to give it a try and go for it anyways, and see how I fare. I would love to be able to say I put my pinky toe on that Olympia stage in Vegas.”

Years ago, one of her gym friends told her about Beverly International. “He told me their brand had the highest quality out there. I had tried many other companies’ proteins and was always turned off by the taste and chalky feel. UMP was not like this at all. It tasted really good and mixed easily as a shake or pudding. I grew up on homemade pudding and was thrilled when I discovered I could mix UMP with a little water and make a delicious pudding. I like chocolate and the graham cracker flavor is really good, too!”

Lean Out and 7-Keto MuscLean are my two must-have’s during my fat cutting phase for competition. I take 7-Keto MuscLean thirty minutes before my fasted cardio session upon waking, and again 30 minutes before my PM cardio session. I include 2 Lean Out with every meal. What I love about Lean Out is that it is stimulant free which I definitely prefer over most fat burners that give you the jitters. Adding these two supplements to a healthy diet will help anyone lower body fat faster!

I just started using Density (essential amino acids). Adding 2 or 3 to every meal has really helped with muscle growth and fat breakdown. EFA Gold doesn’t have a fishy taste and it really helps burn body fat. I also take a multi vitamin. 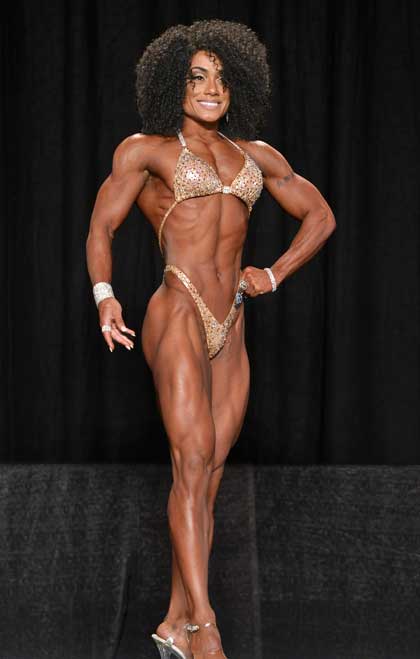 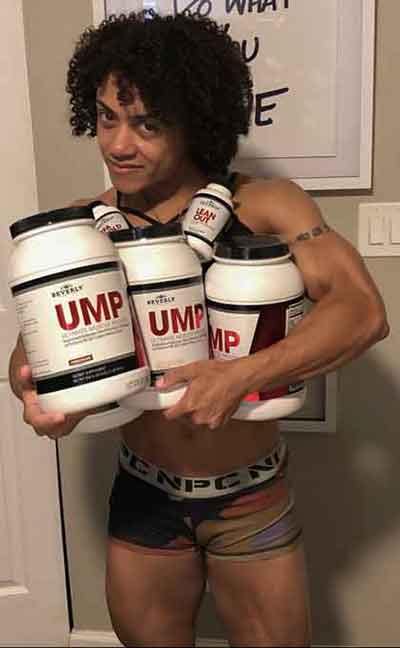 Diet and Beverly Supplements 8 Weeks Out

While most of us count on protein as our primary nutrient, Sharlyn has a unique “more carbs please” macronutrient balance. She consumes five to six meals a day. Because of her fast metabolism, her intake is higher carbs, moderate levels of protein and low fat (under 20%).

“Working as a police officer keeps me eating on the go. I’m in my squad car a lot and don’t have the luxury to sit and eat 5-6 hot meals a day. My typical meal plan consists of a lot of tuna packs, egg whites, UMP protein powder, whole wheat wraps, and oats. I alternate between peanut butter, almond butter and Beverley International EFA Gold capsules as my fat sources at each meal.” Here is a sample day’s eating.

On her off day she enjoys UMP Protein Pancakes, her favorite meal of the week! (See side bar for recipe.)

When it comes to training, Sharlyn aggressively pursues the changes she knows judges want in her build. Her goal is to put on an extra layer of muscle, building a wider lat spread and full, cannon-ball delts. “I have to lift heavy to get those results,” she says. This motivates her each time she heads to the gym. ”Heavy training and volume is what I need for that extra muscle.”

”My workout routine changes frequently but here’s a sample of what I’m currently doing. I am including the actual weights that I used in my last workouts to give you a point of reference.” For example: 95/6 means the weight is 95lbs and I got 6 reps. On some exercises I just do as many sets as it takes to reach a total number of reps. On these exercises I rest just 30 seconds between sets.In the workout below I indicate this as: Machine Rows – 60 reps, 30 seconds rest.

Leg Extensions: For a total of 70 reps, 30 seconds rest
between sets

Sharlyn adds that, “It is important to have great swolemates for lifting partners.” Her serious swolemate team includes Mia Wilson, Derick Abel, and Tay Raines for support and motivation. “On the days in which I am super-tired they push me to the limit!”