At a Glance: Doug Ludmann

Favorite Bodybuilding Meal: I absolutely love making pancakes out of UMP and egg whites. Sometimes I'll mix in some ground flax or almond flour. You really can't screw them up!

Favorite supplements: Up-Lift, Muscle Synergy and Glutamine Select for my workouts. Muscle Provider post workout (MP is my favorite for post workouts because it's not filling so I can still consume a meal quickly thereafter); Quadracarn, Ultra 40 and Mass Amino Acids all day.

What would you recommend to someone who has never used Beverly supplements before? UMP - there is no better meal substitute.

Most Inspiring Book: The Book Thief

There I was, all 5’1”, 79 pounds of me asking my father to send me to weight lifting camp the summer prior to my freshman year of high school. Looking back, I’m not sure what I was thinking, but now realize what my father was probably thinking- but he sent me anyway. I still remember the looks on the coaches who ran the camp when I walked in. I didn’t even know which way to lay on the bench, and that 45lb bar felt like a ton, but I didn’t care. Even though I was clueless about weight training, deep down inside me, I knew this was where I belonged.

In high school I was a runner; sure, I lifted weights but I was a runner. My college recreation center was amazing and I frequented the gym there, but still my focus was as a runner. After graduation, yes, still a runner, lifting on the side- 5k, 10k, half marathons, ultra-marathons- you name it I ran it!

I was introduced to Beverly International in 2002 at the Gold’s Gym in Alexandria, KY and upon tasting UMP I have never considered any other brand. As a runner I used Glutamine Select immediately post run and UMP soon thereafter. I started to learn how to properly fuel my body from the No Nonsense magazine. I’d read every word in each magazine making notes on how people trained; their favorite lifts, and their splits. An amazing thing happened, the more I lifted, the better my running became. I was able to go further and faster. The stronger I became the faster I got.

I started running at age 13. Twenty six years later, yes 26 years later, I won my first race. Most people would have given up by that point, but let me say that 26 years of training for that first win made it that much sweeter. That year I was able to win multiple races, finishing up 2012 by winning a 30-mile road race in cold, windy, rainy conditions. Then a few years later, at 42 years old, I hit a new personal best at the marathon distance completing the Flying Pig Marathon at 2 hours and 50 minutes.

A week after that race I decided I wanted to enter a bodybuilding show. Talk about stepping out of my comfort zone! I sent in my entry for the NPC Kentucky Open in August, 2015, but a week before the show my appendix had different ideas. Post-surgery I focused on recovery and realized that the Natural Northern Kentucky was coming up. I began preparing as soon as I was allowed to get back to lifting. I made up for lost time with my diet and training and came into that October show completely conditioned. I won my class, but missed out on an overall win in the Mens Physique division.

Next, I prepped for the Northern Kentucky Grand Prix the following spring and came in as one of the best conditioned in my division. I won the Masters Mens Physique, but that was it. I was just too small to win the open. I competed in two more shows where I sacrificed conditioning for a little more size and missed the top spot due to not being lean enough. Remember, it took me 26 years of running before I won my first race, so I wasn’t about to give up yet.

I went back to my key bodybuilding info resource, Beverly’s No Nonsense magazine, and came across an article on Dave Uhlman. I asked around and couldn’t find anyone who did not praise his physique coaching ability. Something that really struck my interest was that he was still stepping on stage in his 40s!!!

I contacted Dave 10 weeks out from my upcoming show, the NGA Kentucky Natural Classic. He immediately went to work refining my diet and training. For the first time, I started gaining muscle mass while I lost fat. Dave had me working harder in the gym and eating more than I ever had before leading up to a contest. I came into that show with a physique unlike anything I ever imagined I’d have. I was both “full” and “hard”. I won my class, the Masters class and “finally” took that elusive overall spot in the open Mens Physique division, earning my NGA Pro Card at 44 years old 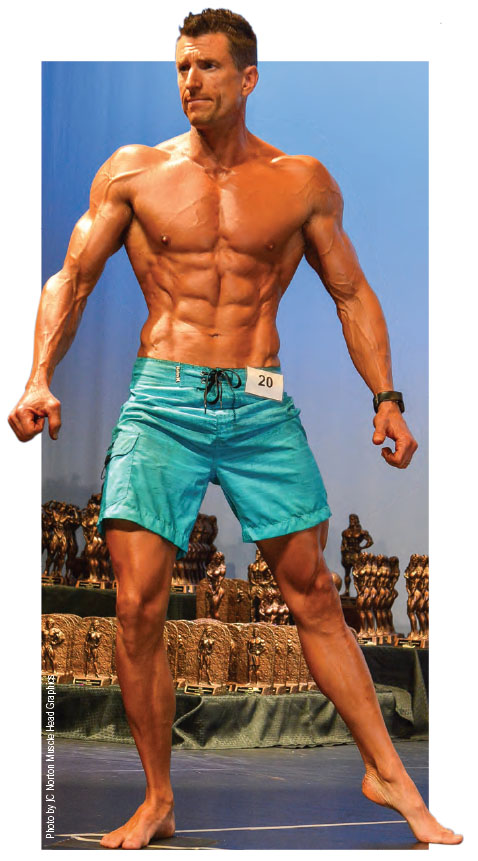 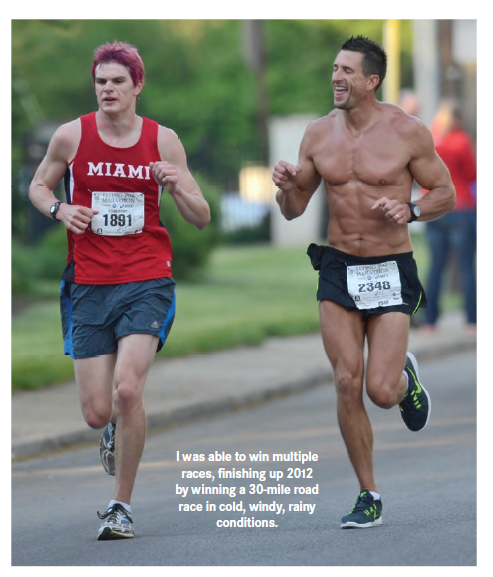 I need to mention how different Dave’s approach to “Peak Week” was than anything I had done before. He was very observant to how my body reacted to different levels of carbs and proteins and utilized specific Beverly supplements based on my diet. He had me constantly supplementing with a wide variety of Beverly products. Ultra 40, Mass Aminos, EFA Gold, Muscle Synergy, Muscle Provider, UMP, Up-Lift and Quadracarn were all essential during the prep. Now to get back to “Peak Week”, it was amazing… No major changes! We did the work early to get lean and just continued with the same program during the final week.

Next, I would step out of my comfort zone once again. If anyone ever deserved the title “chicken legs” it was me. Genetically my legs are long and skinny. But with the advent of the classic physique category, I wanted to try it. My next time on stage I would not have long board shorts to hide my legs.

Dave and I went right back to work. I leaned out quickly and yet again on Dave’s diet was able to build muscle mass and lose fat. My upper body, even my lower back where I tended to hold the last of my fat leaned out nicely. However, my legs were not leaning out like the rest of my body. Dave switched my workouts up to where I trained legs twice a week, Quads on Monday and Hamstrings on Friday. It was an absolute struggle, but after months of leg workouts, posing, and extremely clean eating, we got my legs to a respectable size and lean enough to step on stage in Classic Physique. I think the hour-long posing sessions that Dave put me through twice a week played a large role in getting my legs into contest shape. I was actually getting more sore from posing than from my workouts.

I had hit a new low body fat level and went into the Kentucky Natural Classic leaner than ever. I was able to win my weight class, the Masters class, and again the overall top spot, but this time in Classic Physique, earning a NGA Pro Card in a second category. I also won the Pro Mens Physique Class. I’ve included my diet, supplement and workout plans in this article so you can see exactly how I did it.

I could have never walked on stage that conditioned and that full had it not been for Dave Uhlman and Beverly International. Putting your faith in someone is not easy, but once you find someone you can trust as a coach, you must let them do what you hired them to do! And with Beverly, I trust I’m getting perfectly clean supplements that help stimulate my metabolism to lose fat and assist me in building/maintaining muscle.

Prepping to step on stage is one of the hardest things anyone will do and that’s coming from someone who has trained for ultra-marathons. It takes the same persistence and hard work, but it also takes months of 100% discipline in your diet. And most importantly you have to be ready to step out of your comfort zone and pretty much live out of that comfort zone for a few months.

Every week’s workout varies, but this is a good example.

Wednesday: Back – squeeze each rep

Thursday: Shoulders and Biceps - so many people forget about the eccentric movement especially while doing shoulders. Making the lifts as hard as possible is the goal here.

Note: I do core workouts after my fasted cardio focusing on abs one day and obliques the next. I normally do these as my breakfast cooks.

My diet does not vary too much from in season to off season. Quantities may change, but the types of foods stay pretty much the same.

I'm a lighting designer specializing in high end resort developments for my occupation. I am lucky enough to work from home most of the time, but I do a lot of travelling which makes meal prep very difficult. I may travel for 5-10 days at a time and when I'm on contest prep I make sure I'm prepared. I bring a lot of my food with me- 6oz bags of tuna, 90-second microwaveable rice, rice cakes and all my supplements take up the bulk of my travel bag. Eating out can be scary, but I have found that restaurants are very accommodating most of the time. If I can’t find a sushi restaurant or a Chipotle, I'll just ask for a plain chicken breast and broccoli or asparagus on the side.

Before fasted AM cardio: 2 Quadracarn, 2 Lean Out, black coffee