My Never Ending Quest for Perfection 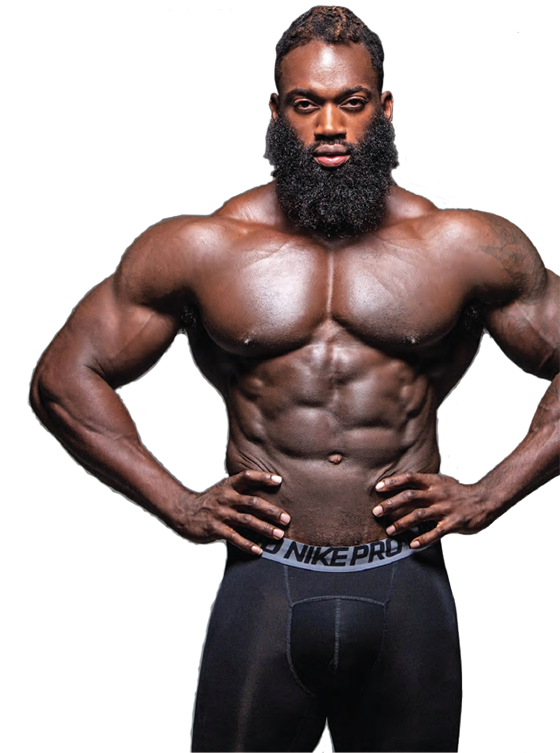 At a Glance: Aaron Robey

What supplement would you most recommend? From my own experience, I'd recommend Ultra 40 liver tablets. I achieved significant muscle growth from Ultra 40 and no bloating.

Hobbies and interests: I love muscle cars - restoring them, studying them, and watching them in car shows. I can be captivated by them all day.

Words to work out by: "Study proper form for each exercise and hit high burning reps till failure."

Originally from Columbus, OH, I moved to Atlanta in the 8th grade. I was always tall but extremely skinny. Being thin in high school wasn't a problem. I played basketball, and my height was an advantage. But as I transformed into a man, skinny no longer was working for me. I wanted size. People who worked out regularly looked like giants to me. I was enthralled. Lol, getting size became my mission in life.

One problem, I had the ambition but zero ideas on how to go about achieving it. Then one day, while eating breakfast at a restaurant, I saw one of the trainers from the local gym. He looked like he was 300lbs of
pure muscle. I wanted that look. The next day I joined his gym and was faced with a whole new set of challenges. Primarily, I had no idea how to train. First, I turned to the muscle magazines for advice. I tried various workout routines and made a little progress.

My reading led me to believe that the supplements advertised in the mags were the real secret. I spent hundreds of dollars monthly looking for the combination of supplements that was right for me. Unfortunately, none of the products worked as advertised. I was discouraged, but at the same time, I was gaining knowledge. I began eating cleaner. I started to see some quality results by ditching the fast foods and sugars for whole meats and complex carbohydrates.

Fast forward a year or so, I had a conversation with a professional bodybuilder. I asked him the same question that probably a hundred others like me had asked. "How can I get bigger?" He told me that he was personally eating beef liver tablets like candy. I immediately started researching and wore out Google looking for "the best liver pills." All signs came back to Beverly International's Ultra 40. I ordered two bottles and started taking ten tablets per day. The tablets are defatted liver, nearly pure protein. As the months passed, the lean muscle came.

I learned that what the magazines and internet made look easy, was in reality, the hardest thing I'd ever done in my life. However, I was hooked and continued learning more and more about my body. As I progressed, I realized that I was not taking in enough amino acids to maximize my muscle gains. So, I did my research and came back to Beverly for their Mass Aminos tablets. Mass Aminos was a game-changer. I finally was reaching my full potential and, within a year, had gained enough confidence to compete.

I pushed my body to the absolute limit during my contest prep and was devastated when I didn't win. I looked good but not as good as I thought. I learned from my defeat and went back to the drawing board. I realized that fitness was a mathematical equation as simple as 1 + 1 = 2: Hard work plus consistent dieting equals success. The amount of focus needed to achieve the physique of your dreams is incredible.

Diet is something I still haven't mastered

Off-season, I'm pretty relaxed. My foundation eating is to be sure to include a dozen eggs and 2lbs ground turkey each day (along with 30 each Mass Aminos and Ultra 40 liver tabs) plus some nut butter each day. But carrot cake, cookies, and cheeseburgers are the nutritional devils in my life (which I try to enjoy in moderation). I don't think you need to have an extreme diet all year. Learn your body. Understand what you can eat and what you can't. Whatever I eat throughout the day, I make sure I complete my foundation eating.

Everything changes with contest preparation. Every gram of protein, carbohydrate, and fat is ever so important. A typical contest diet entails 12 egg whites, 2lb of ground turkey, oatmeal, cabbage, and unsalted nut butter daily. My favorite supplements are Ultra 40 and Mass Aminos. First thing in the morning, I take 6 of each along with my essential vitamins (A, B-Complex, C, D-3, E). At each meal, I take eight more Ultra 40 and Mass Aminos. These supplements have worked great for me in preserving my precious muscle during extreme dieting and cardio.

Sodium is cut by nearly 90%. Sodium acts like a sponge in my body that absorbs water. When I remove sodium, I have minimal water retention. I don't cheat, I don't miss meals, and I don't skip workouts. At this stage in prep which is around three weeks out, I am like a robot. Each day becomes a repetition of the last. Stick to and complete the process in its entirety, and you will reap the benefits.

Typically, in the off-season, I lift for high reps to failure with lighter weights. While training for a contest, my trainer, Rory Sessions, pushes me to the brink of exhaustion using heavy weights and high reps. I have never been a fan of lifting heavy, but his method completely transformed my physique. I entered the Arnold Classic Amateur with a transformed body – an extreme amount of clean and lean muscle. I took 4th in that show.

Unfortunately, Covid hit as soon as I made it home from Ohio. Gyms were closed everywhere, and I didn't lift for three months. My weight increased to 265, but the 3-month rest healed my body completely. The Olympia was a few months away. Rory and I went right back where we left off. What I learned from the last show is that recovery was an issue because of the heavier weights. Beverly International had the answer.
I increased my Ultra 40 and Mass Aminos and added ZMA 2000 for nighttime recovery. This stack prevented me from losing muscle while I dropped body fat. Showtime, I gave all I had left in the tank and earned a 2nd place performance at the Olympia Amateur. Rory is the king of training, and Beverly International is the king of supplements.

Working out is a never-ending push for perfection. Enjoy the journey and take your training seriously. But as with everything in life, you must learn moderation. Take a break from working out sometimes and eat that burger. It will increase your motivation to push harder in the future.