By: Steve Colescott, The Guerrilla Journalist

There are various levels of gym devotion, from the lazy gym wallflower (that directs equal effort into cable crossovers as they do to texting on their cellphones) all the way up to the all-or-nothing iron fanatic (that wouldn't think twice about missing his mother's funeral if it falls on leg day). The best lifters, however, land somewhere in the middle, with their fitness goals being very important to them, but just one part of a very rich and balanced life.

Russian-born immigrant Iryna McCraw is an excellent example of someone that fits family, career, and training into a life in which she can excel at all three. Her resume includes raising two happy, well-adjusted children; the founding of her own training business (Success Fitness Systems Gym in Madisonville, Kentucky) with a full roster of one-on-one, group and online clients; and a number of championship placings in figure competitions, with the goal of eventually earning her IFBB pro card. But Iryna was not always certain for fitness success. She faced a well-defined turning point which led her to completely transform her lifestyle.

Iryna's defining moment occurred following the birth of her first child in 2001, when her body weight rose to an unhealthy 210 pounds. It was this moment of reckoning that served as the impetus for her to force dramatic change, with the gym, kitchen (and eventually figure stage) being the staging grounds for that rebirth.

Iryna found that having a weight problem was extremely difficult, both from a physical and emotional perspective. "I was embarrassed to wear certain clothing," Iryna says. "I remember wearing long stretchers under my jeans so I wouldn't look so chunky. I also remember feeling very intimidated in the gym with my chubby arms."

"I didn't know how to start," Iryna recalls, "but I knew I had to do something." Due to her competitive nature, the hard work, even if not necessarily focused in the right direction, started to change her body. “I began pushing myself even harder in the gym and experimenting with nutrition. With consistency and determination, the results that I wanted began appearing.” This is when she started to get the attention, and help, from more experienced lifters in the gym. They mentored her and (most importantly) showed her the areas she needed to explore to get her training, nutrition and supplementation right.

When the results in the gym really started to show, Iryna was told that she HAS TO compete in figure events. It turns out this is exactly the motivation and focus she needed to give her efforts greater purpose. She first competed in 2004 at the NPC Kentucky Muscle, and she has since continued to compete, even winning the overall at the 2011 Northern Kentucky Figure, one of the most competitive regional events in the country. Her goal is to win an IFBB pro card. A goal that seems attainable by someone as driven as Iryna.

It was at the 2004 Kentucky Muscle show that Iryna met Sandy Riedinger. “I asked Sandy for her feedback on my physique and how I can improve because I knew deep down inside that there is no turning back for me!” Iryna not only received competitive guidance from Sandy, but she was introduced to the Beverly International products, which have contributed greatly to her progress.

Iryna has created a foundation and support system of like-minded women that bolsters the support she receives from her family and clients. “Meeting so many wonderful and strong women inspires me to continue. I am now officially hooked! I approach my daily workouts with great enthusiasm.” She looks forward to her training sessions each day, as it helps her relieve stress, sharpen her focus and discipline and continually challenge and improve herself. “Staying healthy and fit is necessary for me to have the energy to balance my busy life. It is necessary for me to stay sharp in all areas... mental, physical and emotional... and is something that my healthy lifestyle affords me.”

Since starting, Iryna has become a student of the game, learning everything required to optimize her training, nutrition and supplementation. This has allowed her to share that knowledge with her clients, both those that train in her commercial gym and those she helps through her online coaching business (www.irynamccraw.com). Their progress mirrors her own and not only has driven the success of her coaching, but made her work extremely fulfilling. “I can't imagine myself living without working out and the way it makes me feel.”

As a busy trainer and someone who values her family time, Iryna keeps her training fast-paced and gets things accomplished quickly. This is part of the reason she makes great use of super-setting, to cut down her rest periods. This follows her “working my muscles, not my mouth” philosophy. In addition to being an efficient way to train, Iryna also feels that the short rest
periods contribute to keeping her lean. Here is a typical week's training:

Iryna does not train abs on any particular day or with a specific program. She trains them occasionally and without heavy weights as she wants abdominal development without thickness. She also finds that they already get worked since they are stabilizers for everything from squats to triceps pushdowns.

Iryna usually doesn’t do any cardio during the offseason to ensure that she maintains her muscle gains. She starts her contest prep diet twelve weeks out, which does not include cardio until four to six weeks out (depends on her fat loss progress and overall conditioning). Her cardio is 30-35 minutes long, four times a week and includes sprints and the Stairmaster in the late evenings. “I like looking ready two weeks before the actual event so that I can polish a few things without killing myself and don't look exhausted and flat,” says Iryna. This level of year-round preparation keeps contest dieting from being torturous. “I guess all of us at some point need to realize everything we do in life voluntarily needs to be enjoyable.”

Iryna practices her posing all year long. “To be honest, I never stop. I think it is fun, improves my posture, and helps me project a natural look on stage.” Iryna makes this part of her consistent regimen.

“We all know where abs truly are made... in the kitchen!” says Iryna. If you follow a clean diet of healthy foods with proper caloric amounts, you will have no problem seeing your six-pack. Here are examples of Iryna's eating protocol...

As an energy snack, I have a half grapefruit twice during the day.

I drink about one-and-a-half gallons of water a day and add about an extra gallon during pre-contest with extra electrolytes added to the jug.

She has a number of recipes using Ultimate Muscle Protein (UMP) as the base, but her Banana Nut Muffin Tops recipe is her favorite (see below).

1. Preheat oven to 350°.
2. Combine all ingredients.
3. Stir until well blended.
4. Pour into Pam-sprayed muffin top pan and bake about 12-15 minutes.
5. Muffin tops should be firm in the center when done and must be refrigerated or frozen.
6. Pop it in the toaster in the morning or eat cold on the go. Good for pre- or post-workout healthy treat. 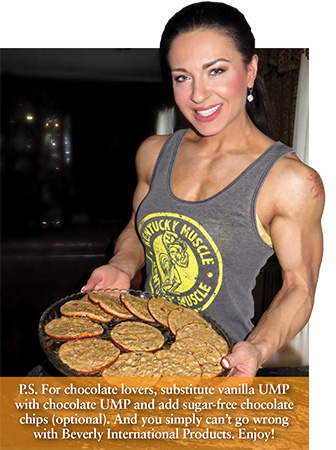 Iryna has been taking Beverly International supplements since 2004! “I subscribed to the Beverly No Nonsense magazine and also received one of their books about the benefits of taking BI products. It provided easy, step-by-step guidance for beginners all the way up to advanced bodybuilders.” Beverly is more about passing on proper knowledge than selling products. That said, they also have a line of supplements of the highest quality. “Our bodies must recover with best available supplements on the market,” says Iryna. “You can’t go wrong with Beverly. I have been using it for years and it works!”

Ultimate Muscle Protein: “The one and only! Occasionally, I have tried different brands but always come back to Beverly products for the best flavor, texture and quality. UMP also helps me with my sweet cravings.”

Glutamine Select: “This is the best during/post-workout recovery drink made! Plus, it also contains BCAA (leucine, isoleucine, valine) which helps maximize recovery and build solid muscle.”

Ultra 40: “The ingredients speak for themselves. BEEF it UP!!! This is made to gain lean quality muscle. It contains heme iron, the most bio-available form of iron in the diet.”

Quadracarn: “Quadracarn gives me tremendous energy, drive, pump and muscle hardness. I absolutely love the way it makes me feel.” 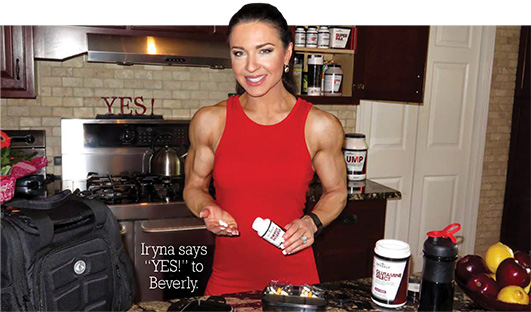 The Beverly line of products have become a consistent part of Iryna's daily intake. She also lists the Super Pak and/or Fit Tabs among her regular purchases, and adds in 7-Keto MuscLean and Lean Out as a contest approaches. “I also take them during work travel and family vacations.”

The Beverly International products are well-regarded by all members of the McCraw family. Iryna's husband Ron also set a goal to feel better overall and lose weight (he lost 50 pounds) and included Beverly supplements in his diet. 14-year old son Daniel, who plays football, uses Glutamine Select for post-workout recovery. “My 3-year old daughter Eva even likes to sip on my vanilla UMP shakes!”

Since her livelihood is based on providing results, Iryna also makes it a point to recommend Beverly products to all of her clients. “The changes with using Beverly have been unbelievable!” says Iryna. “Supplements help my clients to stay focused and always on top of their game. They are busy people so if I can teach them to incorporate a shake and supplements into their routine, it will easily fit into their hectic schedule and keep their energy levels stable. And the taste of Beverly’s protein is truly the best. I dedicate my life to helping people who want to achieve their goals, and Beverly is a helpful part of that.”

Iryna McCraw serves as a great example of how a person can make the decision to go from a life of quiet desperation to accomplishing amazing things. “With the right nutrition, training, supplements, unwavering focus, determination and belief in yourself, magic happens! I truly believe that there is nothing that is unattainable. Trust yourself. Trust results. Trust Beverly!”