At a Glance: Michael Sheppard

What would you recommend to someone who has never used Beverly supplements before: I would let him or her know that they are excellent products. I have been using them since 1999 and trust what they are supposed to do for me, my body, as well as my bodybuilding career.

Hobby or interests outside bodybuilding: I am truly a gym rat at heart, but I do enjoy riding my Hyabusa.

Words to live by: When you go through hardship and decide not to surrender, that is strength.

I have been a competitor my entire life. From sports in high school, to college basketball, I wanted to be the best I could be. When I found bodybuilding, I fell in love.

My first bodybuilding competition was in Guam (1997). I didn’t know much about competing, but I had been training for about 5 years. The gym owner talked me into it and I was good enough to win the heavyweight division that night.

Two years later, I moved to Ft. Hood, TX and started working out on post in the same gym where Johnny Jackson once trained. At one of the shows there, I noticed the overall winner talking to a Beverly International representative named Richard Dougherty. I approached Richard and expressed interest in get-ting some diet and supplement help for the upcoming Lackland Classic (1999). Richard invited me down to his store where he taught me all about Beverly International products. Having learned the difference between BI and the other brands, I have been using BI ever since.

I dieted for 12 weeks starting at 220lbs. Contest day I was very nervous, but leaner than I had ever been in my life. I won the 198lb class and also took the overall title. After that win I was hooked, I did the 2000 Southwest Natural and took the heavyweight class. I also did the Texas State and took 5th. I was just not as seasoned as the guys competing at the state show. In 2001, I took second at the Heart of Texas competition, and third at the Texas State. I was moving forward, but I still had a lot to learn and improvements to make. More and more I saw that it is as much about symmetry and the “X-Factor” than just size and definition. I needed to bring my legs up to match my upper body.

I took 4 years off from competition to build more size in my legs and improve my proportions. I used two main strength movements for legs. Every leg day, I’d start with heavy squats and then follow them with heavy dead lifts. I know it’s not com-mon to do squats and deads in the same workout, but it worked for me and my legs grew.

I finally decided to get back on stage in 2006 and pursue my pro card with the NGA. This competition prep was the toughest yet because my sons’ mom was overseas. I was trying to run a business, train and diet for the show, and play both parents at the same time. I was in and out of fast food restaurants while trying to stay on a diet plan of some sort. At the John Colby Classic (2006) I weighed 205 and got a close second. My Beverly supplement plan was on track, but not my diet. I just wasn’t eating right. The following year my sons’ mom was home and I was able to go for my pro card again. I did the John Colby Classic again and this time won first place and took the Overall at 212lbs. I won my NGA pro card that night. At this point my friend wanted to shoot a documentary about my prep and we put a few videos online. (Google: “Mike Sheppard the Natural on you tube” to view them).

hen headed to the big NPC shows in 2011. My official comeback was at the 2011 Adela Garcia Classic where I took the overall. I felt like I kept getting better and better so I went to the Branch Warren and took a close second, then headed to the Europa and took second again. While traveling to the show I got lost the night before weigh-ins. I didn’t get checked in until 3am. Thank goodness I had my Beverly International shakes in the car. My contest weight was now up to 219.

I did the 2012 Branch Warren in Houston as a prep show for the USA’s. I did not put full attention to my prep due to work, meetings, and travel. But, I ended up taking second place to Steven Frasier. I was looking forward to a rematch with Steven at the USA’s in July.

I arrived in Vegas on Sunday night. For the week leading up to the show I ate 5 solid food meals each day and added 4 Ultra 40’s with every meal. I got tighter and tighter as I followed my supplement program which I’ve notated below. The USA was the biggest show I had ever been to in my life. 500 competitors and 40 of them were in my weight class. I was very nervous, but knew I was at my best for this show.

I was second to last to go out on stage and I had nothing to warm up with. So I looked up and saw a beam going across the ceiling. (Anyone who knows me knows that I love doing pull-ups.) I jumped straight up and started doing pull-ups. My fellow competitors were shaking their heads as they watched me doing one pull-up after an-other. You can tell by my smile on stage that I was happy to be there and for the experience. Now I know what’s next and what they are looking for. And as a footnote, Steven Frasier, remember him, the guy who beat me at the Branch Warren, he won the overall and got his IFBB pro card.

I had a few adjustments to make for the 2012 season. My supplement plan was rock solid, but I needed stricter off-season nutrition. I also needed to continue to build up my legs while backing off a little on upper body. I trained legs heavy twice a week. Although I like to stay strong, I know there is no award for strongest legs so I had to work on shape as well. I had to figure out how to balance the two. (See more about this in my training schedule.)

New challenges are ahead for me. I am in the Super Heavyweight category now and am up against a lot of people that natural bodybuilders typically just don’t go after. But I have goals. I want to win the Branch Warren. Taking second there twice is not good enough for me. I would love to qualify and compete at the Master’s Olympia. I know that I have not yet reached my best possible condition. This year I will work harder, I will perfect and tweak what needs to be done. I won’t stop. I’m hooked on Beverly International, on training and on bodybuilding competition. I’ve been a lifetime competitor, and that will never end.

First and foremost let me say that nutrition is the hardest part of all of this for me. I look at dieting kind of like Lent. For about 40 days I must take things out of my diet that are impure and will harm me in the long run.

MEAL #1
1 cup oatmeal, 1 scoop vanilla UMP with 1 tbsp flax oil, Splenda brown sugar, and dried cranberries. (Occasionally I use one of the recipes from BI’s website for Protein Pancakes/ Shakes).

MEAL #5
1 scoop UMP protein somewhere in the afternoon normally gets added in because I am so hungry. 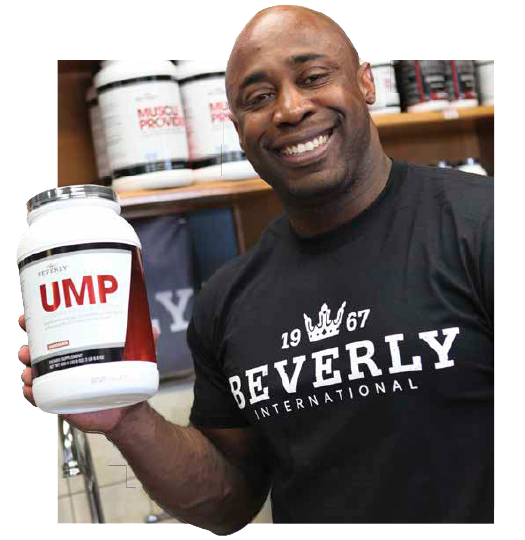 UMP, Muscle Provider, Ultra 40, Lean Out, GH Factor, 7 Keto, EFA Gold, Density, Muscularity, and ZMA. I use this entire combination because of the muscle building and fat burning properties. 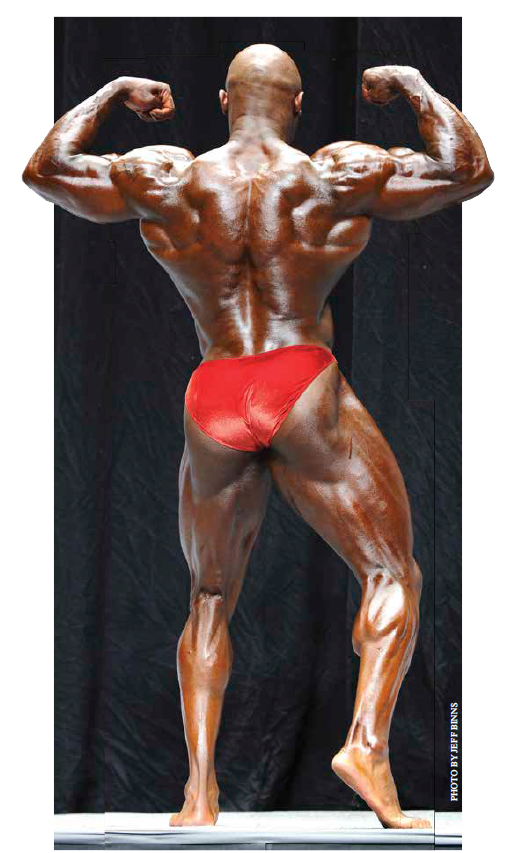 Monday/Thursday: Back and Chest

Major body parts are trained in the morning; every evening I head back into the gym and do a small muscle group workout (20-30 minutes of Dips, Pull-ups, Abs, and Calves), practice my posing, and then do 45-60 minutes of cardio.

A basketball player practices year round, on or off-season. He never stops practicing. So, like a basketball player, I never stop. I train year round, and at 12 weeks out I kick my posing practice into high gear, holding each pose harder and holding it for progressively longer periods of time. I spend 15-20 minutes each evening working on my mandatory poses. Monitoring your posing year round really helps me identify areas where I need improvement. As the event grows closer, posing becomes more exciting than working out. That’s when I can really see how I’ve progressed from competition to competition.

Two weeks out from every competition I love to put myself through “Hell Week” as I call it. It’s an 8-day week program. I use the stepper and add 5 minutes every day. The first day, I begin at 65 minutes and I end at 99 minutes (since my steppers don’t go to 100). The last day makes everything else seem so easy. Good luck and Godspeed. (Tip: Have really good music with you.)