At a Glance: Dawn Reichley

Favorite Supplements: UMP Protein (all flavors), Fit Tabs, Ultra-C, Glutamine Select, Muscle Synergy, Fast-Up, Quadracarn, and GH Factor. These are my favorite products that I use not only in contest prep but also year round for off-season training!

What would you recommend to someone who has never used Beverly supplements before? I’ve sampled various protein powder supplements and Beverly UMP has been the best. The flavors taste great and UMP blends very well with fruit and oats.

Music: TRY THEM……. you won't be disappointed! UMP is the best tasting protein powder on the market and all the other products are high quality grade with the athlete and performance in mind.

Hobby or Interests outside bodybuilding: Spending time with my family (mostly on the soccer field) but also enjoy shopping and quality time with friends.

Words to live by: “Your mind is a powerful thing. When you fill it with positive thoughts, your life will start to change.” - Unknown author

I started weight training after graduating from college. I had been a collegiate cheerleader
(placing 2nd nationally) and was invited back for the alumni game. I didn’t want to be the alumni cheerleader that everyone whispers about, “look how fat she got”. Although I kept in good shape, it was very difficult for me to add even a little muscle. In college I’d been a tiny 90-lb flier so I definitely didn’t have much muscle to work with starting out. And on top of that I had almost no knowledge as to what to do in the gym or how important proper nutrition was in building muscle.

I started reading and researching to learn what to do. My staples were Oxygen magazine and Muscle and Fitness. These magazines helped some with my training but I was still clueless about how critical nutrition and proper supplementation are to growth and improvement. I finally hired a trainer in 2006 and he introduced me to Beverly International supplements and started building a diet for me to follow.

After training for several years I had made good progress, but became bored and complacent with my workouts. My physique had also hit a plateau. I decided to hire a trainer and sign up for a show, just to say I did it. I was hooked! From 2011 to 2014 I competed in 3-5 shows a year. I loved the stage and rarely took much time off between shows. During that time I placed top 5 in figure class A in every NPC show I did. Although I loved my achievements I wanted more.

I decided to set my goals higher and go for my ultimate goal of becoming an IFBB Pro. I competed on the national level for the first time at the NPC Jr USA. I placed 3rd in my class, just missing out on my pro card. At my third national show in 2014, the North American Championships, I won my class and finally earned the title of IFBB Pro!

What I didn’t know was how different things would be at the pro level. First, I learned I needed to take some needed time away from the stage to continue to build my physique and bring up my weak areas. That said, I needed to know what the pro judges thought were my weak areas. I’d have to take a leap, jump in with both feet, and do a show so I could gain their insight and feedback. I did my first pro show in March 2015 where I was in a lineup with 29 amazing ladies and took 3rd callouts! I also learned that at the pro level there are no height classes, boy was that a wakeup call for this little 5’0 tall nugget. You learn that everyone at the pro level looks amazing, strong, conditioned, and posing becomes even more critical. It has been a humbling experience to say the least. Going from a perennial top 5 NPC competitor to an IFBB Pro that hasn’t been able to crack the top 10.

But, that is what I love about this sport. It keeps me driven, hungry to improve, and strong in both mind and body. I have changed my mindset along the way from “I gotta place top 5” or “I’m training to win”, to a mindset that it is truly “me” vs “me”. Now I set a goal to do everything in my power to step on stage better than the last time. If I beat the ME from the previous show then in my mind I’ve WON! I achieved my goal. At the end of the day if I put 100% into my contest prep and left no stone unturned, then the rest is out of my hands. At that point it’s time to step on stage, have fun, and enjoy the process that got me there.

I was still behind the learning curve regarding nutrition even at the start of my competitive career. Even though I knew the types of foods to eat I didn’t know the correct portions that would maximize my gains. I severely under ate for my goals to build muscle. I relied on protein powders and bars for my main source of protein vs utilizing whole foods like chicken, turkey, eggs, fish and red meat. I literally did not eat any whole food proteins at that point. I also had this forbidden fear of carbs so I always under ate carbs as long as I felt like my energy was OK.
The first step to getting my nutrition on track was adding chicken, fish and eggs into my diet. In 2013, I incorporated red meat into my diet as I started my quest for a pro card. Lately I’ve also learned that my body now responds very well to carbs. 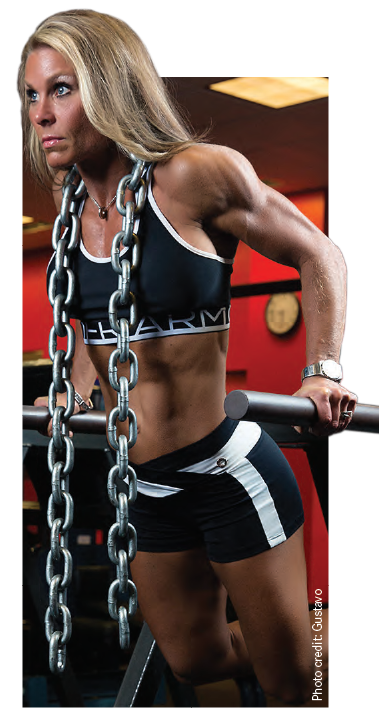 I meal prep 2 times per week, once on Sunday and again on Wednesday. Each night before bed I weigh out my meals and put them into containers to take to work with me the following day. I also load my supplement container so it is ready to go as well. It’s all about planning ahead and being prepared. I am very strict with my meal plan when I’m in contest prep and never stray from the plan. In the off season I allow a little more flexibility for substitutions. For example if I’m craving something sweet I might substitute Beverly UMP pudding or make a protein pancake in place of one of my planned off season meals.

You’ll notice in my workouts that I exhaust each body part with one exercise for 1 set of 30-45 reps before moving into my main exercises for that body part.

Note: Abs are incorporated at the end of my workout 2-3 times per week utilizing body weight movements only 3-4 sets at 25 reps.

Contest prep: slowly increase as the show gets closer, but at around 3 weeks out I’m doing 6-7 days per week for 30 minutes steady state before my workout and 15 minutes HIIT after my workout.

My preferred cardio is the step mill, or spin bike. If I’m doing a short HIIT session, I tend to lean towards treadmill sprints.

Stage presence is huge. Presentation includes suit selection, hair, makeup, tanning and most important posing. I have worked with several suit designers to help select a color that best works with my skin tone, hair and eye color. I also think it’s important to choose something bright that will stand out against the bold stage lights but it should be a color that you feel confident in as well. I have always had a professional apply my makeup because I’m pretty clueless when it comes to any makeup and especially stage makeup that is needed to show up under the bright lights. I have had my hair done professionally and also have done it myself. The overall package should complement your physique not distract from it. Finally, the part I feel is most important, posing. My best advice is practice, practice, practice until you can’t get it wrong. I have worked with several posing coaches over the years to help showcase my physique in the best light. Finally bring your confidence and a smile! You have worked hard to get to that stage, smile and enjoy it!!!

My experience of becoming a competitive athlete has been one of the most challenging, yet also most rewarding experiences, I have taken on. I wish I had started younger but I’ve realized that fitness is the fountain of youth and you should never limit or define yourself by age. If you have a dream or a goal, chase it with your whole heart. Bodybuilding is a lifestyle commitment and you will get out what you put in. A fitness lifestyle requires drive, desire, commitment, motivation, and discipline. It has helped shape who I am in all aspects of life. I have learned that I can achieve what I put my mind to. I have learned that it’s better to try and fail than to never have tried at all. I hope that I can motivate and inspire others to get up, get moving, implement goals and challenge yourself to new heights. We are given one life and one body and I chose to live it to the fullest, chase my dreams, learn from my mistakes, and grow into a better, more well-rounded person every day because I have left nothing to chance!

Posted in 2019 Collection, Most Popular.