Juggling Act: Balancing Life's Demands with Bringing My Best to the Stage 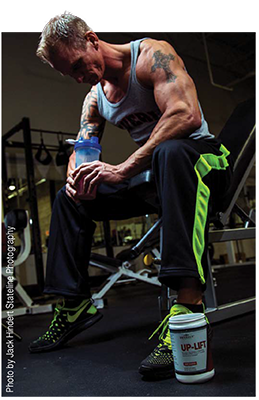 At a Glance: Chad Forrester

Bodybuilders often experience tunnel vision when it comes to getting ready for a contest. They allow their training schedule, diet, posing, etc. to take over every fiber of their being. Friends and family become alienated. But, it doesn’t have to be that way. Producing a stage worthy physique does not have to consume your total being. The key is maintaining healthy relationships and balance in your life while still getting it done in the gym (and at the dinner table).

I was fortunate enough to gain the assistance of prep coach, Ray Binkowski, who explained things to me in Yoda-like fashion. Ray said, “Remember, it’s your family and work which allow you to do what you do.” In other words, real life takes precedence over prep and training. “If you need a day off, take one. If you have a birthday dinner, eat it.” I lived my last prep according to this cardinal rule. My experience was much more enjoyable than my previous contest preps. I could still satisfy my OCD-like personality by following his direction to a “T”. However, he had built enough flexibility into my training schedule and diet to allow me to achieve a balance between family, job, life in general, and bodybuilding.

My career is very demanding. I am a retail store manager for a large home improvement company. I work long hours and have to remain somewhat flexible as my schedule can and does often change. Passion for my job is an understatement. And it’s a good thing since much of my pay is tied directly to job performance. During this latest contest prep, a new element was thrown in the mix. Our company is continually looking for ways to give back to our community. Last fall we took on the challenge of completely remodeling a duplex which had been given to a homeless Army Veteran and his family. Although rewarding, I worked on Balancing Life’s Demands with Bringing my Best to Stage the project 12 hour days, 7 days per week for a month in order to complete it on time. This was smack dab in the middle of my contest preparation. I continued to make my lifts in the gym (before or after work) and keep my diet on point whether I was home or on the construction site.

Even more important than my job, is my family. My son plays football for Grand View University in Des Moines, Iowa. Of course I wanted to see him play, so I took several nine hour round trips to Iowa on Saturdays to watch his games. My daughter, a junior in high school, was cheering for Friday night football games and performing on a competitive cheer squad. I didn’t miss out on those either.

The point is I did not compromise the important things in life (being a good husband, parent, leader, co-worker, etc.) for bodybuilding, but I still stepped on stage looking my best. In the remainder of this article I’ll tell you how I got into bodybuilding and provide my training program, diet, and supplement program. This has helped me continue to make muscle gains while dropping body fat, as well as allowing me to stick to my diet while on the job site, traveling to my son’s games, and attending my daughter’s cheering events.

Why I started bodybuilding

I have always been an athlete, was a four letter athlete in high school, and even played a couple years of college football. I trained with weights throughout, but after my organized sports career was over and life stepped in, my lifting became an “on again, off again” (mainly off) proposition. One day in 2006, as my wife and I were getting ready in the bathroom she mentioned that I looked like I had put on a few pounds. That’s all it took. Off to the gym I went. I started with a typical three day per week program, much like how I had trained for athletics. Then I added a fourth day, and eventually a fifth. After a few years of steady training a friend suggested that I think about competing. I did some research and in 2010 I took the plunge into competition. I made a respectable showing, and then took 4 years off to live life. But, the itch returned. I decided to compete again in the OCB Midwest States in November of 2014. I was hoping to attain my natural pro card but the competition was of an extremely high caliber. I was still able to place fourth in the master’s class, and fifth in my open class.

Here is one of the best parts of my program – my training, nutrition, and Beverly supplement programs allowed me to step on stage having done NO cardio! That’s right, no cardio! To be honest with everything else I had going on, I don’t know if it would have been possible to do the kind of cardio I had always done for past contests.

In the training program below, almost all exercises were supersetted. This had a two-fold positive effect of cutting down my time in the gym while keeping my heart rate elevated and allowing me to burn more calories each workout.

Core exercises are performed at the end of workouts on days 1, 2, and 3. On day 4, I performed a special superset designed to cut up my quads (which were lacking).

Meal 2:
2 scoops of UMP
a handful of berries

A specialized supplement stack of Beverly products helped me achieve and maintain balance in my life. UMP made it convenient to stay on track while road tripping to college games or locally for cheer. I felt better and had more energy, drive, focus, and improved health. Week after week I continued making muscle gains while dropping body fat. You read that right; I was building muscle and losing fat at the same time as a drug free athlete. When my day was done, ZMA 2000 helped me sleep like a rock. The Quadracarn/Muscularity combo helped me drop fat without cardio while Density helped me retain max muscle.

• 3 Quadracarn with 3 Muscularity 3 times per day 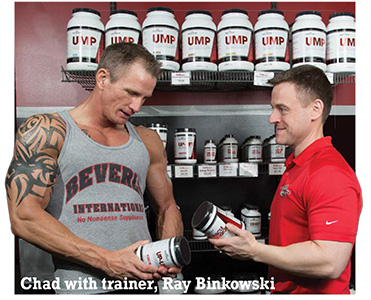 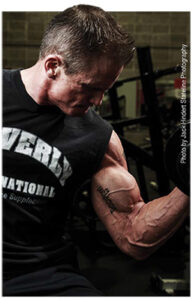 Why did I use Beverly? My trainer said that it was the only brand he would recommend. That got me researching their products, and after learning about Beverly’s quality and reputation, I decided to go all in. I am so glad I did. I truly believe my prep experience would have been a much different outcome if not for Beverly. Having prepped for contests with and without Beverly International supplements, I can say that with Beverly I gained more muscle, and had more energy and FOCUS.