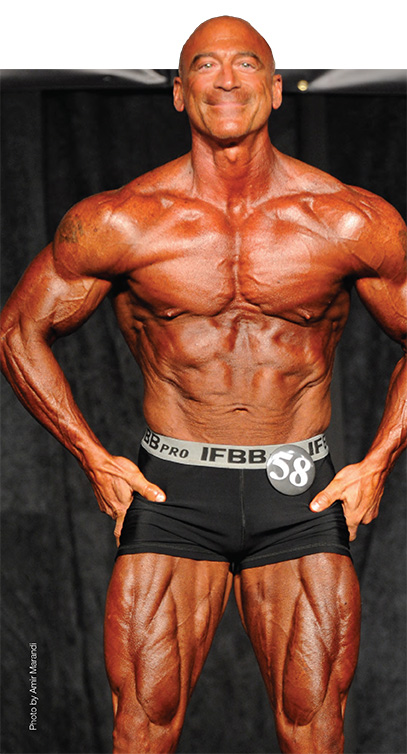 At a Glance: Joe Corbett

Off season- UMP, either Cookies & Crème with half cup egg whites, a cup and a half of almond milk and ice in the bullet, or I will mix 1 scoop of vanilla UMP and 1 scoop of chocolate UMP in the same shaker.

Competition prep- Energy Reserve and Quadracarn. I think this really made a difference in terms of fat loss.

Music: I like the heavy stuff- Tool, Flaw, Static X, Korn, Disturbed, Volbeat…. But on my training playlist I also have praise and worship which really motivates me especially during cardio.

Hobbies: Spending time with Stacey and the kids. They are all at the age that it’s so fun to be around them, and I feel I don’t get enough time with them. I don’t really care what we do as long as we’re together.

Words to live by: “I can do all things through Christ who strengthens me” Philippians 4:13

Fitness has always been one of the most important things in my life along with my family and my faith. I first competed more than thirty years ago while in my early twenties. I did a few shows but soon was married and starting a family. Over the ensuing 10 years, we had 5 children. Although I tried to stay in shape by lifting and doing cardio a few times a week, competition had taken a back seat to family. I still ate clean though, not only for myself, but to set a good example for my children and get them off to a healthy start in life. None of us suffered though; my wife is Italian and makes the most nutritious foods taste great.

Fifteen years after our first child was born I decided to try another competition. One show led to another. My children were growing and I was able to become more and more focused on my training and nutrition. Soon I was competing in a couple of local shows each year and doing well in nearly every one.

In 2010, I met Travis Wallis. My goal in working with Travis was to advance from the local stages to larger regional contests. One of the first things he did was introduce me to Beverly International supplements. He explained that we work extremely hard in the gym and watch everything we eat, but when it comes to supplements, most bodybuilders just fall into the trap of taking the “supplement of the month” or whatever has the most advertising behind it. They have no idea what they are paying for, and in many cases, more is spent on the marketing of the supplement than on its ingredients.

Since 2010 I have competed in no less than 3 shows each year and the most was 5 in one year. That was a little much, but boy did I have fun. I was now having good success in many of the larger regional shows. One of my competitive highlights was winning the Masters class at the 2013 Europa in Dallas. During this period I traveled to almost every area of the country to compete and since I was doing well at this level, I decided to try the national stage. Whew, the national shows are huge! There might be over 1,000 competitors in the show, and guess what? EVERYONE is in shape. I finished 7th at last year’s North America, but the truth is, although my conditioning was great, I just wasn’t quite big enough for bodybuilding on the national level. But, I wasn’t through.

Late last year, Travis took a new job and was unable to work with me for 2016, but I found Mitch Staats to take his place. I had met Mitch when he won his IFBB pro card at the North America and what really sealed the deal was that he was totally a family guy like me. During the off season, I kept my calories high, but my diet was absolutely clean. I started my competition diet for the Team Universe in mid-February, 20 weeks out from the show. It was a long prep, but it allowed me to eat more and I was rarely hungry. I trained harder than ever. A new wrinkle that Mitch added was to eat carbs only around training. As you’ll see in my Supplement Schedule, I took nearly 50 Mass Amino Acids and Ultra 40 liver tabs each day. It made a visible difference, I could see my body becoming bigger and fuller while my conditioning improved.

At the Team Universe I competed in both Bodybuilding and the new Classic Physique division. I felt good about entering the “Classic” division because the emphasis was not so much on size, but on aesthetics and conditioning. I have had a dream of being an IFBB pro ever since reading Muscle & Fitness as a kid. Frank Zane was my all-time favorite and I think he still best represents the ultimate “classic physique.” Well that dream never went away, it was always in my heart but I never shared it because I felt it was so out of reach. At Team Universe on July 2nd of this year, I placed 3rd in the light heavyweight bodybuilding class. I was really happy with this result. It was my highest placing yet in a national level contest. But, then I changed out of my posing suit in to the spandex shorts required for Classic Physique. I took the stage and won my class! I had achieved my dream - I also earned IFBB pro status at 54 years old.

My diet was modified slightly each week in terms of macro quantities based on how my coach thought I looked, but the basic foods didn’t change. By the way, I had no cheat meals or refeeds or whatever you want to call them. Here is a sample of what my daily meals consist of.

Mix 1 scoop of chocolate UMP with just enough water to make the consistency of pudding. 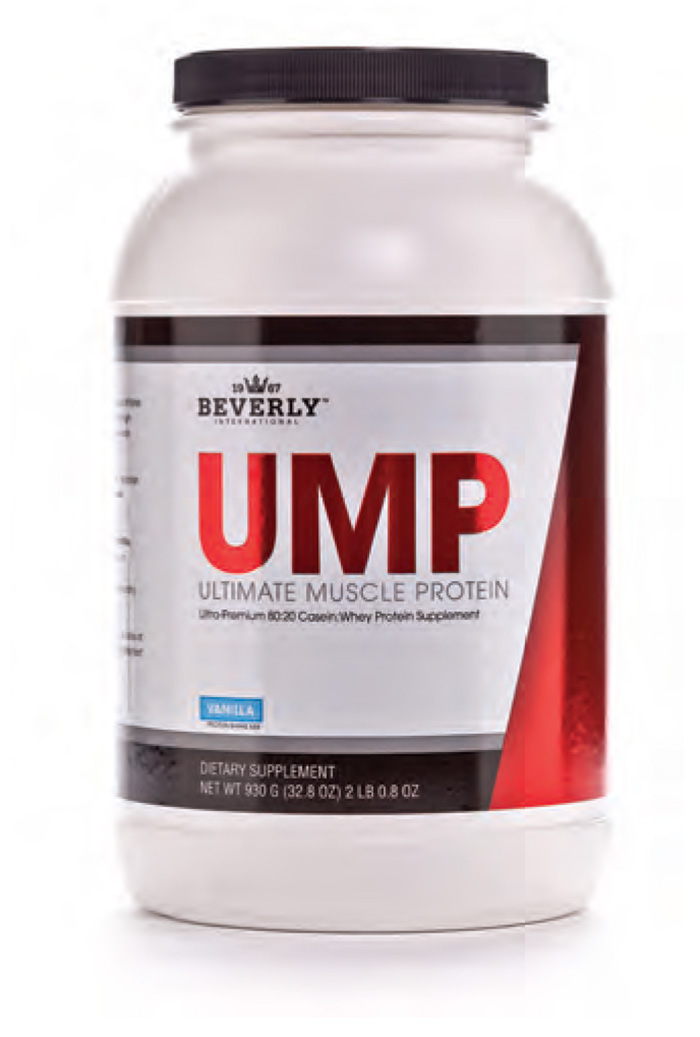 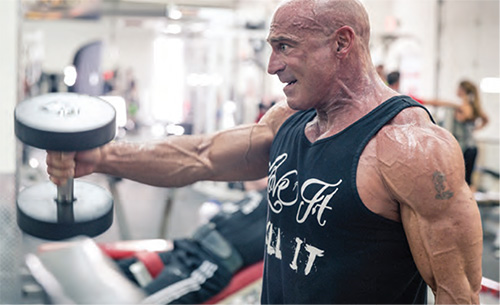 "Over the years I’ve have gotten to know Roger and Sandy and the Advisor Team at Beverly International who are so helpful and service oriented. There are many supplement company options to choose from, but for me it’s a TRUST thing. I trust the products I use, and no amount of money can buy that trust."

I dramatically improved my size and fullness this year. I am convinced that this improvement was the result of the changes I made in my diet and supplementation. I held more muscle, looked fuller, and even grew throughout my contest prep while still achieving a high level of conditioning. My diet and supplement schedule are below.

I have been training for the better part of 40 years and absolutely love training. My training partners are my son, Joseph, and my daughter, Kasey. I train 1 body part each day and perform a lot of sets each workout. My training is heavy most of the time. Rep range is usually 6-8, but I might slightly increase the reps for movements later in the workout. I utilize many training principles including strip sets, reverse pyramids, rest pause, EMOM (every minute on the minute), forced reps, TUT (time under tension), negatives etc. My current favorite is Mechanical Pause sets – this is where I might not reduce the weight to extend a set past failure, but change my stance or hand placement to keep going – using the bench press as an example, you’d go from a narrow grip, to a wide grip, to your strongest grip.

Here is a typical training session for my favorite body part, legs. Unless noted, I usually do 4-6 sets per exercise.

Leg Extension
1 set of 100 reps. Use a weight that you can do for 40-50 reps without a pause; take a 10-15 second break, then do as many as you can again, another 10-15 second break and so on until 100 reps are completed. I have so much blood in my quads it’s hard to walk to the next piece of equipment.

Hack Squats
6-8 reps. I go heavy on these and emphasize the eccentric movement.

Hammer V Squat Machine
6-8 reps. This is an older piece of equipment, but you can substitute free squats or another type of squat machine, again, go heavy on these.

Walking Lunges
8-12 reps per leg. I do these S-L-O-W emphasizing the eccentric portion dramatically while leaning forward slightly. Your glutes and upper hams will be screaming.

Calf Extensions on Leg press
1 set of 100 reps. Pause for 15 seconds as needed until you complete 100 reps. Use a full range of motion on every rep, all the way up and all the way down, no bouncing. Do these diligently and your calves will respond.

Donkey Calf Raise
6 sets of 20 reps. Again, squeeze each rep and utilize a full range of motion. It’s important for you to feel your calf contract as you come out of that fully stretched position.

For many years I felt very uncomfortable on stage, but lately I have learned to love it. I still don’t consider myself a good poser, but I’m getting better. I watch old videos of Bob Paris and Charles Clairmonte and marvel at how fluid their posing is. Practice is vital. There are times during prejudging when you might have to hit each mandatory on stage without a break for 5 minutes or more while judges are comparing you with the other competitors. I have been on stage with guys who were big and peeled but during comparisons they just quit, bending over with hands on knees breathing like they just ran a marathon. If you need help with your posing seek out a professional who understands stage presentation and can effectively communicate the process to you. This year I worked with posing coach, IFBB Pro Angela Coleman, and it made a huge difference for the Team Universe.

On A Personal Note

We now live in Venice, Florida most of the year, but also spend time in our hometown of St. Louis, as well as travel all over the country for work. As I travel, I have been in a lot of gyms. I like those that are privately owned more than the big chains. Regardless of where I am training there are always people who are trying to improve themselves. Almost everyone is helping and encouraging one other. However, you’ll also find a few know-it-alls, and there always seems to be as many gurus and coaches as there are competitors. There are also blogs, videos, and social media with (mis)information in our face constantly. Let’s face it. None of this stuff is proprietary. We should share what we know, and if we can help just one person get over a sticking point or stay with it when they feel like quitting, it is worth it.

Here’s one bit of advice that I know is true. Don’t over complicate things or make them harder than they are. If you eat clean year round, train consistently using basic movements with barbells/dumbbells, and focus on high quality supplements that actually have science behind them like Beverly’s products, you will improve no matter what your age. I’m 54 and I believe I am my best ever, and more importantly I am still improving.

Editor’s Note: Joe is starting an educational entity called “Mature Muscle” that will provide good, accurate, and useful information to anyone who works out – from the beginner who wants to improve his/her fitness level to the seasoned competitor. By the time you read this you should be able to find it on the web at www.MatureMuscleCollective.com, on Facebook at Mature Muscle Collective, and Instagram at Mature_Muscle_; besides some great information, you’ll also find Beverly supplements and fitness apparel on the site.