It’s All About Progression...Not Perfection 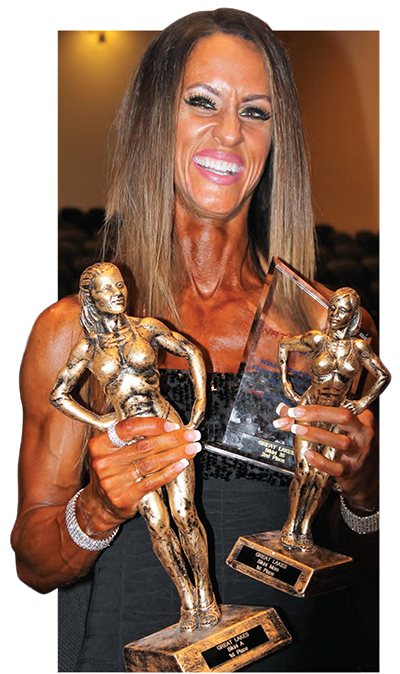 At a Glance: Michelle Gonda

What would you recommend to someone who has never used Beverly supplements before? UMP

Music: Hip Hop, Rap, Pop, Heavy Metal, anything goes really … When the lifting gets tough the headphones go in!

I watched my Dad lift weights as a little girl in our basement. They say your children are always watching and listening. I know that I absolutely was. But I didn’t really start working out until I was 30 years old. That’s when I joined the YMCA and began using the cardio machines. I took a few weight training classes but the weight room intimidated me.

Ten years later I was going through a divorce and decided to try a bodybuilding competition. A friend reintroduced me to that weight room and we began working out together. We gave it our all for 16 weeks, but neither of us had much knowledge of the importance of nutrition or proper supplementation. Consequently, I placed last in two divisions in my first contest. I was absolutely devastated; my confidence was at an absolute low.

A few months later I approached Jack O Newport, a bodybuilder at our local Y. It was COMPLETELY out of character for me. But, I left that conversation with a fire in me to try again, and also butterflies in my stomach because I really liked him! Three years later (2017) I competed again. That bodybuilder who had given me butterflies had become my boyfriend. I competed again in that same show where I finished last and this time took first in both divisions with his coaching.

On July 3, 2017 life as I knew it changed forever. My world stopped. My 21-year-old son, Marine LCpl Luke Gonda took his own life. My grief absolutely consumed me. The next year I decided that prepping for another show might be therapeutic and help me navigate through the grief. It forced me to get out of bed. It forced me to exercise. It forced me to eat. It forced me to be social. The gym became my antidepressant.

I competed in October after the hardest contest prep I’d ever gone through. I was told at that show my physique had become too muscular for their bikini division and placed accordingly. I was heartbroken and questioned if the bikini division, which I loved, was no longer an option. Through the encouragement of Jack and local gym owner and IFBB Pro Judge, Jack Sullivan, I stepped out of my comfort zone and into another organization, the NPC.

I trained for 24 weeks and competed in the NPC Mid-Atlantic States bikini division. I placed 1st in Masters 40+ and 2nd in three additional classes while qualifying for the NPC Nationals. I went right back into prep for 4 more weeks (and fulfilled an ultimate goal) when I stepped on a national stage at the NPC Masters Nationals in Pittsburgh, PA. I didn’t receive the placing I’d hoped for (received 3rd call outs) but we either win or we learn and I learned a lot from the experience. I know what I need to do to be competitive at this level and I plan on trying again in July 2020.

After the Nationals I was battling the post competition blues when I saw a contest sponsored by Muscle and Fitness Hers on social media. It was for the title of “Ms Health and Fitness 2019”. I entered (along with 20,000+ other women). The title is decided through online voting and donations to the Wounded Warrior Project. Through weeks and weeks of voting I’m humbled to say I made it into the Semi-Finals along with 150 deserving woman who also had their own stories and journeys. This was very near and dear to my heart having two sons who followed the military path as Marines.

Exercise has helped me navigate through very difficult times and has been my antidepressant. I’ve been blessed to spread mental health awareness through this platform. It is a true honor to be featured in the No Nonsense magazine and to be able to share my story with others.

I run through my posing routine almost every morning before I shower in the off season. During contest prep I work with my coach on Saturdays after HIIT training for about 1/2 hour. This typically starts about 8 weeks out. Posing is something you can always improve on and it should become second nature. My nerves take over on stage and that’s when the auto pilot kicks in.

I have competed in 6 shows since I started in 2014. My placings range from dead last to first and everywhere in between. My best advice for a competitor is do not let the placing define you. Train to win but enjoy the experience and the friendships you make along the way. Last place drove me to try again and first place gave me the opportunity to step on the stage at Nationals. You never lose in this sport. You either win or you learn. You can always improve and that’s what drives me. It’s all about progression not perfection. God willing, I stay injury free I will continue to compete until I no longer find joy in the sport.

Saturday: My “Cheat” day. I typically stay on track and splurge on one meal (dinner) but allow myself more flexibility while still
following the plan throughout the day. If I want a cookie, I eat a cookie or whatever I’ve been craving that week.

EFA Gold 3 softgels with meals 1 and 4

16-Week Contest Prep Diet (7 days a week*)
I do all of my meal prep and shopping on Sunday. (This plan gets tweaked by my coach depending on my physique)

*Cheat meals are very limited – only if it is determined that a refeed day is needed.

Wednesday:
Rest Day (during contest prep I may add a cardio session)

I use the same basic workout during both the off season and contest prep, but intensity increases during prep.