At a Glance: Tim Walton

What would you recommend to someone who has never used Beverly supplements before? Determine your goals, look through their information and guides, and make a phone call if you need further assistance. Beverly has to be the most helpful supplement company with their avenues of information. You can't go wrong!

Music: I like a variety but for working out, it's Manowar.

Most Inspiring Book: I read a lot, but never felt compelled to write a letter to an author until I read Robert Kennedy's, Bull'$ Eye.

Hobby or Interests outside bodybuilding: Reading, trying to learn to be a boater (we moved on a lake), traveling/doing things with my wife, dog-sitting my son's stocky bulldog, Boris.

Words to live by: "You're right again dear!" (Haven't been married for 35+ years without that, haha!) But inspirational words, easy: "Press On!" by Colonel Chuck Yeager. No matter what got in this guy's path, he just kept going. Simple, to the point, no excuses.

Growing up working on farms and involved in school sports were a good base for me physically. There wasn't much in the area of equipment, nutrition advice, or information back then. I welded a bench out of plumbing pipes in shop class with a bare plank for the flat part, "borrowed" some sand-filled weights from my older brother, winged it on nutrition, and worked out on total instinct using trial and error.

In the military, I ended up on a small restricted base in Turkey that had a large closet they called a weight room. We improvised alot while reading the latest Muscle Mags trying to emulate what the Pros were doing. We didn’t realize that most of it was fabricated and wasn’t what they were actually doing or using. I made some decent gains nonetheless.

In civilian life, I got married, moved to a new city, and we struggled mightily for a long time as jobs were scarce and the pay was sparse. Living on Ramen Noodles 3 times a day for a year and a half isn't conducive to gains, believe me. Eventually we solidified ourselves financially and started our own business. (Hello working 12-16 hours a day including weekends!) At the time we focused more on our son Dan's athletic ventures rather than our own although I did try to set a good example by regularly getting my workouts in. I continued to follow the bodybuilding scene, but never seriously considered competing. I didn’t know of any natural contests and there was no way I was going to do any drugs. Time was always a constraint also.

Then, about a year and a half ago, a friend of mine took me out to the Body Alive Gym in Utica, NY for a free Saturday workout.
I loved the Old School atmosphere and vibe of the people working out there. But what caught my attention was "The Wall". There were large posters of members on the wall who were obviously accomplished. I asked the owner, Bob Donnelly, "How do you get up on that wall?" He replied, "Win." I had competed, and been successful, in quite a few different areas of athletics over the years, but felt a need to compete in something again as it had been a long time since putting myself on the back burner for life's other endeavors. When I found out the people on "The Wall" were natural competitors, I now had a goal in the back of my head

This past summer, Bob asked when I was going to try a show. As it happened, I was actually starting to step away from our business at that point, so time was no longer a factor. I said I was in. He pointed to a contest 7 weeks away and said he could get me ready. Seven weeks isn't a lot of time, but he had been out in Venice, CA during the "Golden Era" and had worked out with the legends. I drove 80 miles 6 days a week to train and we kicked it Old School style so intense that cardio wasn't needed. The only "Cardio" I did was to walk with my wife, Joni in the park each day. Unfortunately, that bit me in the butt, literally, a couple weeks out from the contest. We had just started our walk when we sprinted over to pull an attacking Rottweiler off of an elderly lady who was cradling her small dog. I didn't realize it till after the adrenaline wore off that I pulled/strained something in my glute when I sprinted over. I was very limited on legs, but we worked around it and I placed a very close 2nd in the Open in my first contest. The 2nd contest was the following weekend where I once again placed 2nd. A couple months later, I decided to try a 3rd contest. About 4 weeks out, my oral surgeon pulled a back molar as the roots were cracked to the jawbone. He said I couldn't workout for a week. Two days after getting the green light, I learned a new term, “slipped rib”. Three weeks to go! Once again, we worked around it and got a decent package ready. In a very competitive Open Class, I got edged out again, but nabbed 2nd place. I won the Masters Class and finally got my Natural Pro Card. I made "The Wall"!

A lot of credit goes to my wife of over 35 years, Joni, for doing the preps with me and being supportive during the whole process. Obviously Coach Donnelly and the Body Alive Crew who made me feel like I was in a Rocky movie during my workouts with all of their input and encouragement. Joe Dardano, original owner of my hometown Hercules Gym, clued me in on Beverly Products quite a while ago and they've been a staple of my foundation ever since.

I’m very excited to do a few shows next year now that my "Rookie" season at age 56 is over. Looking forward to see how much better I can be having months, not weeks, to prepare and while injury and impediment free. 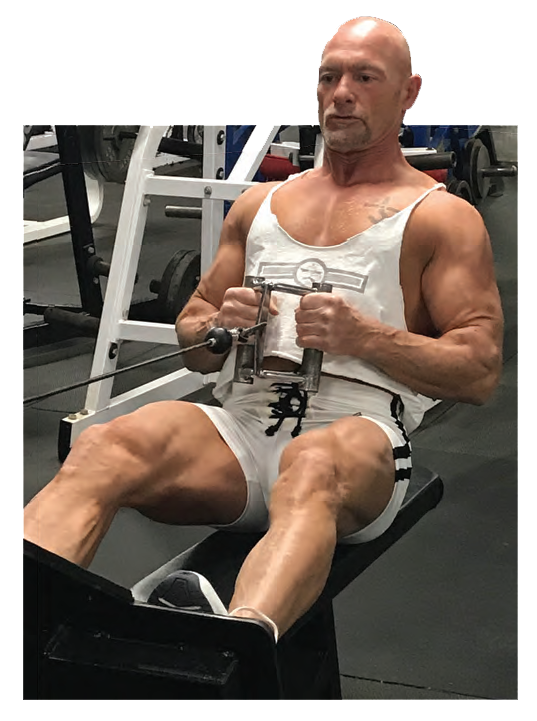 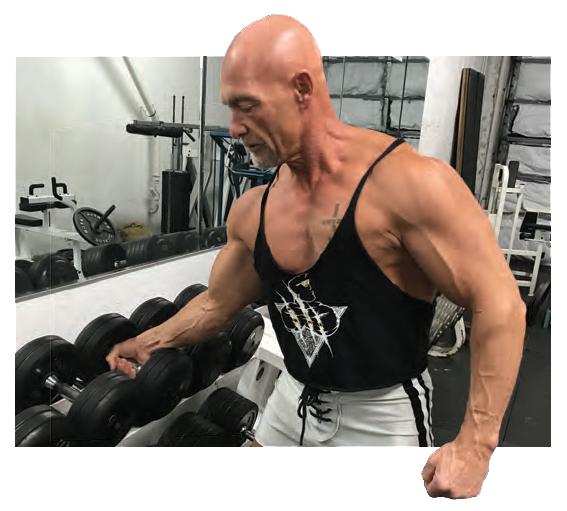 Since we only had weeks, not months, to dial in, I went very basic with my diet. A typical day would be:

The first couple weeks I had chicken breasts in place of cod at lunch and dinner. Apple Cider vinegar and safflower oil were sprinkled lightly on the peppers.

I’ll admit I'm not much of a cook outside of following what's in a cookbook, but one thing I like doing is taking a cup of cottage cheese, add a scoop of UMP Graham Cracker, stir, chill for about 20 minutes, then toss in some walnuts, and there's dessert!

I sip on Glutamine Select throughout the day as I feel it helps me recover quicker and it satisfies my sweet tooth and curbs hunger.

During my workouts I make a drink up with 20 oz of water, 3/4 scoops of both Creatine Select and Up-Lift, and a full scoop of Muscle Synergy. This combo sustains my energy levels during and after.

I usually don't need much to rev up for a workout, but I utilize Fast-Up when I do. I especially like it because it doesn't give you the shakes, crash and tingles like other pre-workouts. You can regulate the potency by how many capsules you take, and you can carry them in your pocket. (By the way, the tingles from others is often an overload of niacin, the shakes from WAY too much caffeine, yohimbe, or 1,3 Dimeth, which is on the WADA banned list.)

I don't count calories as each day is a different expenditure of energy depending on what I'm involved in.I usually carry a small bag of almonds in my pocket as well as some Muscularity and Density. That way, if I'm ever stuck or delayed from consuming my meals, I've got them with me to keep things going on the "Muscletram".

Now two things I did that were different, yet effective as the contest approached:

1. Right before bed I would take 2-3 Lean Out. I figured that it helps convert fat to energy, so why not let it work all night long as I'm lying there? Then, first thing in the morning, I'd take more with my morning I really feel like that accelerated the fat loss in the short amount of time we had.

2. I read a study that carnitine would help draw nutrients and water into muscle tissue during a carb reload before a contest. So, the last 3 days before my contest, I would take 3 Quadracarn 3 times a day with carbs. In mid-morning and mid-evening, I would take 1 Energy Reserve. I'm sure this had a lot to do with my muscles not being flat appearing after dieting down so quickly on a strict contest diet.

Workouts vary from full body ones to split routines. My favorite is a 3 days on, one day off schedule. Every workout starts with a warm-up for that body part, usually a couple lighter sets of each exercise.

Notes: I NEVER do decline presses. As we age, stuff starts to drop. If your upper chest drops a little, it’s no problem. If your lower chest is over developed, you'll probably end up with droopy pecs.

I actually bought a Cybex Machine Row for my home gym, that’s how much I like it. On Pulldowns I use a TK Star True Wing Lat Bar and highly recommend it.

Notes: On safety squats I put the bar WAY down on my back and thrust up with my hips first. Sounds weird, but there is very little strain on my back and it hits the legs better (for me) than "regular" squats.I may do 10 sets of 10 reps on a good day.

I usually use a Strive or Nautilus side lateral machine, but may substitute “running the rack” (a favorite of the 1st Mr Olympia, Larry Scott) starting with 40-lb dumbbells for as many reps as possible and going down the rack dropping the weight 5 lbs each set and doing as many reps as I can, all the way down to the 5-lb dumbbells.

Notes: On the Ab Coaster I do 150 continuous reps switching the hip angle every 25 reps.

Day Four: OFF (Add in an extra day off for 2 in a row if you're really hammering yourself hard.)

Cardio note: My weight workouts are pretty fast paced so my heart rate is elevated pretty good throughout. Some exercises can be supersetted so that the workouts are brief, but intense. If I feel the need for extra cardio, I'll do 10-12 minutes on the Jacob's Ladder followed by 20 minutes on an Airdyne.