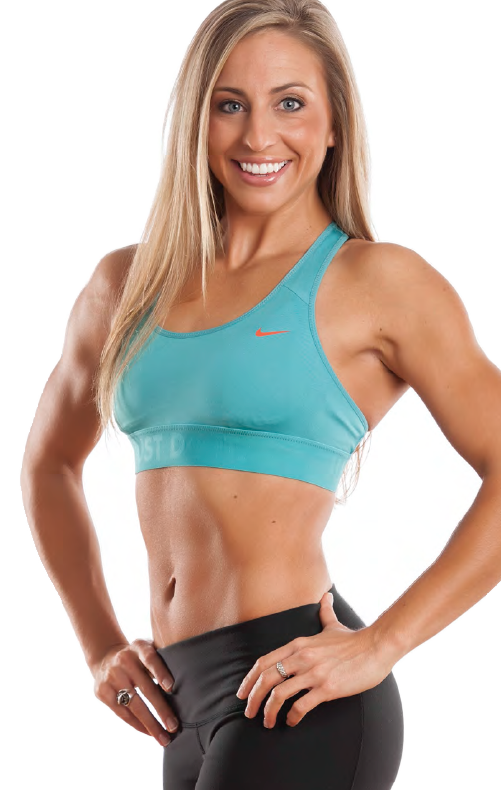 At a Glance: Dana Taggart

Favorite Supplements: Hands down, UMP is my #1. I love how versatile it is. Not only is it delicious as a shake, but I can make pudding with it, or French toast, or No-Bake cookies... the list goes on. My 2nd favorite is Glutamine Select to help diminish any post workout muscle soreness.

Music: I love using Spotify on my iPhone. I enjoy many genres of music and it depends on my mood or what kind of workout I'm doing, though I would say that it is most often some-thing upbeat, Hip Hop or Rap.

Most Inspiring Book: My most recent favorite, in my new found obsession for audiobooks is Born to Win by Zig Ziglar. His concept of planning to win, preparing to win, and expecting to win can be applied to your next competition prep... or just life in general.

Favorite Words of Wisdom: “If you do not go after what you want, you’ll never have it.” “Be strong. You never know who you are inspiring.” “Stop wearing your wishbone where your backbone ought to be.”

I am trying to recall a time when my life was not so hectic, but as far back as I can remember my family was always involved in many activities. I can fondly remember sitting on the sidelines of my parents’ indoor soccer games, my Dad’s open gyms for basketball, watching my Mom doing her exercise videos in the living room, and all of this amidst my younger brother and my sport schedules… many of which involved travel. We had something going on just about every night of the week.

I started playing sports at age 5 and continued throughout my school years. During high school, I ran track, played soccer, and cheered. I played fast pitch softball and volleyball in college
between classes and working a few part time jobs. Even though I had a strong athletic background, I never really had a structured training program or nutrition regimen. I ate pretty much whatever I wanted and whenever I wanted. I was constantly on the go and luckily, my mediocre diet didn’t have much of an opportunity to catch up to me. Once I was out of college, I still played a little indoor soccer, but the opportunity for organized team sports certainly diminishes once you are out of school.

Life seemed to slow down for a quick minute when I started working my first full time job as an Emergency Dispatcher. It was a sedentary desk job on 2nd / 3rd shift. I still ate what I wanted but I started to notice that my energy was lacking. I stayed thin, but lost a lot of strength and stamina. I was tired.

Fast forward a couple years and I found myself a single mother of 2 at age 23. I no longer had time to be tired, but I was…very. After the birth of my daughter in 2008, I joined the local YMCA and began my first attempt at an exercise regimen. It’s interesting how far down on the list of priorities you will allow ‘taking care of yourself’ to fall once your world revolves around your children. Having the Childwatch program at the YMCA allowed me to take some time for myself without feeling guilty because my kids enjoyed their time there as well. Happy Healthy Mom = Happier Healthier Family.

Within a couple years I had put on some muscle and started wondering how much further I could push myself. While continuing to work full-time, I attended the Police Academy and began working toward getting on the other side of the radio. While in the police academy I began to focus more on building my strength as it was now more important than ever. It was during this time that I discovered Beverly Inter-national and their amazing line of supplements when I was given a copy of their No Nonsense magazine by a friend.

I became a full time Police Officer in June of 2012. I am recently engaged to my fiancé, Matt, whom I met in the academy and is also a full-time Police Officer. My children are now 5 and 7 and are active in their own sports. We are just as busy as I re-call my childhood being and though it can be stressful at times, I love it. Training has become my outlet. I mention all of this because it is my hope that the other seemingly over-whelmed mothers that work full time and have busy families know that it is possible to still take time for their self and go after their own goals. In fact, it is important that you do! After all, we are now set-ting the example for our children.

I discovered Julie Lohre’s nutrition and training programs through the No Nonsense magazine. I had been contemplating competing and knew that I had taken my physique as far as I could on my own. I needed professional guidance. I contacted Julie in August of last year and she got me started right away. She’s helped me to work my meals around my crazy schedule and plan ahead for when I would be stuck at a ballgame, or in my cruiser on a call. In just a few months’ time, I’ve gained strength and confidence. I have now competed in 2 figure competitions. I took 1st place in my class at the Fitness America Ohio Valley in October 2013. I went on to compete in the Kentucky Muscle in November, but I didn’t do nearly as well there. In fact, I was on the other end of the placements. However, I am hooked and enjoying the experience along the way… and now training for my next stage appearance as I write this.

Here is my current program designed to lose fat while building a little more lean muscle.

Planning and preparation was the hardest part when I first started but it does get easier with experience. I love to cook, but am obviously short on time, most of the time. For me, I’ve found that it helps to prep a few meals at a time, a few times a week. I really en-joy cooking a meal for us all to sit down and enjoy together. I’ll usually cook more than I need to feed my family for dinner and then use leftovers to prep a few extra meals for myself. While this may not be as efficient as a massive prep day where I make several meals solely for myself, our meals together at the table is something I value.

That was just a sample day. I substitute quite often as I get bored easily when eating the same foods. I usually try to incorporate whatever my family is eating and then make adjustments so that it fits my plan. We also use Green Bean Delivery so that we have fresh organic produce on hand at all times. I love this service for its delivery convenience, but also because it has broadened my family’s fruit and veggie selection from the everyday apples and cucumbers.

Lean Out: 2 before my first 5 meals each day

7 Keto MuscLean: 3 in the AM, 3 with lunch Glutamine Select: 1 scoop before training

This seemed like a lot of pills when I first started. However, I drink a gallon of water a day, and taking the supplements throughout the day also helps me get in all my water at the same time. 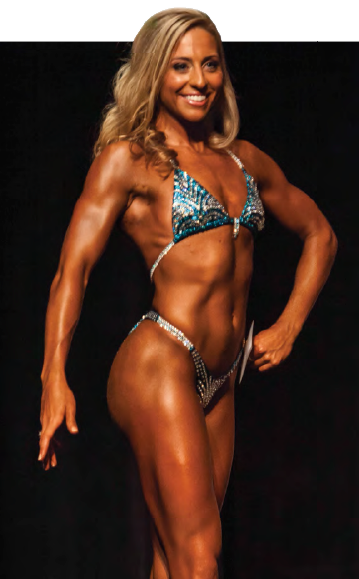 I currently lift 5 days a week along with 4 cardio sessions a week, 30 minutes each (most commonly HIIT). Notice I work Back, Glutes, and Delts twice a week since they are the “show” muscle groups for figure competition.

Oblique Raises 4x10 reps each side

In closing, I am so thankful for the FITBODY Contest Prep Figure & Bikini Team! With my teammates and Julie’s help, I am not alone in competition prep. This journey (though I feel it is still just the beginning) has already given me so much… a better under-standing of my nutrition, knowledge of the competition scene, a supportive team of women that are now also my friends, and a bangin’ body to boot!