For Serious, Truly Committed Bodybuilders Here’s Your Key to Becoming the “Best of the Best" 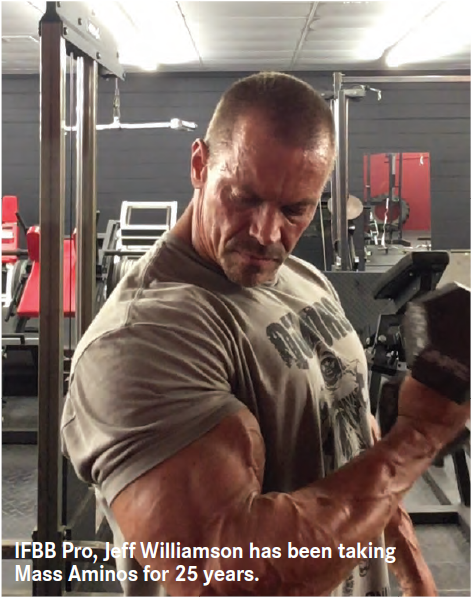 Do you eat, sleep, live and breathe bodybuilding? Do you demand a level of achievement and excellence that is higher than most? If so, you’re probably already doing all the “right” things to reach your goals. Still, you may have noticed that it’s extremely difficult to have real breakthroughs. You’re not alone. You, like many in the bodybuilding community, may have missed a powerful, yet little known truth…one that bodybuilders are most guilty of overlooking.

It’s something that will make a change in your gains comparable to turning silver to gold…turning a contender into a champion. It can prevent any of the training you
do, (every single set, rep and every dollar you spend on nutrition) from simply being wasted! So what’s the solution?

The Most Underutilized Tool In Muscle Building

The nutritional tool overlooked by so many is a specific formulation of amino acids. Dr. Eric Serrano MD, one of the few, unbiased experts on the topic (as in no financial ties to a supplement company) put it best when he stated, "Amino acid formulations are the most under utilized tools available to the bodybuilding community." Scientific research has demonstrated that athletes under severe stress, (hard exercise, weight training, even trauma) can benefit from the peptide bonded amino acids because they are up to 16 times more effective for repair than whole food sources. Yes, 16 times more effective!

But don’t be fooled into thinking “any old amino supplement” is as good as the next. To provide the most benefit, the amino supplement must be composed of pancreatic (enzyme) digests of protein and peptide-bonded amino acids that are readily available for your body to use. The scientific measure used to determine this is the amount of nitrogen found in the supplement, (called the Amino Nitrogen/Total Nitrogen rating), and the most superior amino supplement on the market is MASS, the amino tablet Beverly created that is truly different.

Specifically formulated to provide the rare benefits of rapid absorption and complete utilization, MASS Amino Acids (MASS) begins absorbing in minutes for a rapid anabolic effect, unlike whole food proteins that can take up to 4 hours. But, unlike other rapid absorbing protein sources, Mass is not burned as an energy source, its muscle building value stays intact.

Again, the Amino/Nitrogen/Total Nitrogen ratio is the key to determining how good your amino tablet or capsule really is. One way to think of how important the high nitrogen content of Mass is to your growth is to use the analogy of what happens when you use a “Miracle Grow” additive on a plant. You get a bigger, healthier, greener plant almost instantly. The key reason for this amazing growth is the nitrogen!

MASS Takes On The Competition And Guns ‘em Down!

We don’t mean to sound sensationalistic, but the fact is no other amino acid product holds a candle to Beverly’s MASS. In two double blind studies, Beverly’s MASS amino acids had the highest nitrogen rating of any amino acid in our entire industry. MASS allows for continual protein availability - that means it is not necessary for your body to break down muscle, to supply amino acids for other vital functions such as enzyme production and organ maintenance.

MASS supports an anabolic environment for your muscles throughout the day—preserving muscle mass even during low calorie periods. In other words, the work you do in the gym…stays! Beverly International's had excellent results with our drug free bodybuilder clients who use Mass Amino Acid tablets for increased lean body mass and enhanced recovery from high intensity training.

What Can Happen By Taking Ultra 40 and Mass Aminos Together?

Here’s just a few of the hundreds of letters we’ve received about this powerful stack:

Three Months on Mass and Ultra40 Did What a Lifetime Hadn’t
I've worked out for most of my adult life, and in just 3 months of taking Mass and Ultra40 (six- tablets every time I eat) I now have a look and shape I could never attain before. I am almost 53 years old, but people think I'm much younger. I donate blood every 56 days, and after my last donation I received a letter telling me that I had platelet and plasma quality found in only one in a million donors. I attribute this to Ultra 40 and Mass Aminos... Beverly delivers the utmost quality…the results speak for themselves! There are other quality companies out there, but I rank Beverly #1.
- Bobby Taylor, Gulf Breeze, FL

Five Pounds in Two Months - Not Bad for a 60 Year Old!
I've put on 5lbs in the two months that I have been using Ultra 40 and Mass. I've never used supplements before and obtained results very rapidly. I'm by no means a pro and I'll be 60 next year.
- J.M. Sigears, KS

Mass and Ultra 40 - My Lean Muscle Guardians
I've been a Beverly user for over 10 years now. Those of us who have used Mass and Ultra 40 for a long time might not see the big gains that new users do, but that doesn't mean they aren't an important part of our nutritional plan. Case in point: I had to undergo surgery on my nose in October for a septoplasty and lower turbinate resection, and the breathing tube gave me a sore throat for about two weeks. While I was recovering, I just couldn't swallow the Mass or Ultra 40. I didn't really think this would affect my lean mass that much. To make a long story short,
I didn't make any other dietary changes. But a month later (still no training and no Mass or Ultra 40) my 9-site skin fold was exactly the same (47) only I had lost 14
lbs of lean mass going from 174 down to 160… it just reinforced what I already knew… MASS and Ultra 40 are a foundational part of my nutritional plan.
- Roger Becker, Naval Surface Warfare Center, IN 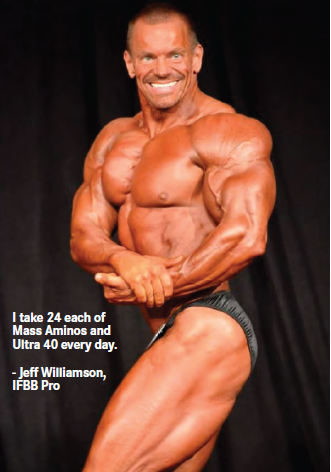 Mass has been around the muscle building block. Its reliable effectiveness shields it from cheap shots by knock-off newcomers. They don’t stand a chance. Mass is the undisputed Godfather of organized gains. It always gets the job done. It provides you an offer you shouldn’t refuse.

Here’s How You Use Mass to Get Great Gains

AND JUST WHEN YOU THINK YOU’VE GOTTEN ALL YOU CAN GET FROM MASS – THERE’S ANOTHER (ALMOST EFFORTLESS) WAY TO MAKE YOUR RESULTS EVEN MORE ASTOUNDING!

It’s true. Begin taking MASS by itself and we guarantee you’ll experience a dramatic difference…but why not go for a real one-two power punch? Stack MASS tablets along with Ultra 40 liver tablets year round for added lean mass gains. You’ll be in good company, as that is exactly what most of the ‘Beverly’ champion athletes do*.

Listen. If you do everything you possibly can to reach your bodybuilding objectives and still don’t reach them then that’s fate, not something to be ashamed of. But, if you let neglect or a lack of applying knowledge that is proven to make a difference stop you just shy of your dream…you’ll wind up with a painful sense of regret. It doesn’t have to be that way.

Adding Beverly’s MASS Aminos to your daily nutrition can and will make a difference. Call Beverly today at 800-781-3475. Try Mass Aminos for yourself.

*Mass and Ultra 40 have a track record that is unequalled by any other non-steroid compound for predictable gains in lean mass! Natural bodybuilders interested in maximum size should do everything possible to get the greatest protein spectrum and utilization. Mass and Ultra 40 are a convenient way to get an amazing and unique amino acid profile to compliment what surely is missing from whole food.