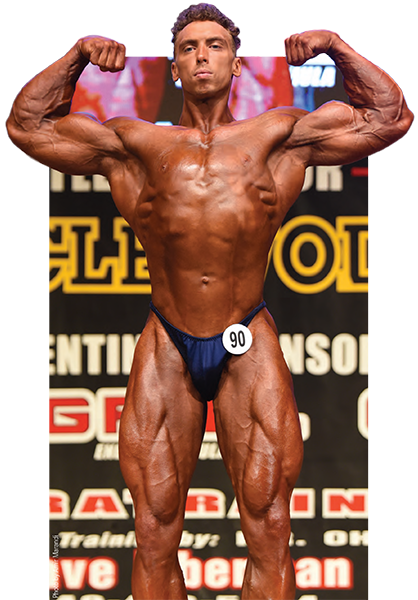 At a Glance: Jermey Holt

What would you recommend to someone who has never used Beverly before? Try UMP, you won’t regret it.

Music: Anything from classic R&B, to rap, rock, and country.

Hobby or interests outside of bodybuilding: I love spending time with my family, play competitive slow-pitch softball, and listen to weight training podcasts by Mike Israetel, Eric Helms and Austin Stout.

I have been interested in sports and fitness my entire life! At the age of 5 I was playing organized baseball. When I entered middle school, I ran hurdles for the track team and participated in baseball and basketball. I excelled at both in high school.

My Grandpa was my coach up until high school. To this day he is the biggest reason why I love baseball as much as I do.

I first started to work out with weights in high school to become better at sports. I focused on legs, core strength, and shoulder and arms so I could hit the ball harder and further. I remember even skipping class just to work out before practice.

After graduating high school, I decided to try out for a few professional baseball teams but didn’t succeed. After a few more years I decided to give up on my dream of professional baseball and turned to softball. Softball was actually better suited to my style of play – geared toward offense –the power I had accrued from my workouts certainly helped me in this endeavor.

In 2013, my mom asked why I had not attempted to compete in any bodybuilding events. I told her I had never really thought about it before but it was something I’d love to try. My mom actually picked out my first competition, the NPC Natural Northern USA in Cleveland, Ohio.

I won the junior division title at that show - it was a pretty amazing experience. From that moment forward I was completely hooked. The next morning, I talked with my coach, Phil, about competing for a pro card in IFPA (International Fitness Professional Association) the following weekend. I won the overall bodybuilding title and earned my pro card that same weekend.

At the beginning of my bodybuilding journey there was a lot I didn’t understand about the sport. But, as I learned from others who had years of experience, I started training more for aesthetics and put much more emphasis on how to eat properly. In six competitions over the ensuing three years, I garnered 6 class wins in the light heavies along with 3 overalls.

I took off a full year from competition in 2016. I knew that I needed to focus on my physique. Another big decision was to switch coaches. At first, I was scared I might never win again. I joined Adam Atkinson’s “Team See You Leaner” and from that moment forward everything seemed to click.

However, my season did not end as I hoped. I had set my eyes on the NPC Universe. First, I would have to win the Indiana Pro, the Natural Ohio, and the Pittsburgh Pro. I succeeded in taking wins in both Bodybuilding and Classic Physique classes in Indiana; as well as both classes and the overall at the Natural Ohio. I also placed 1st in my Classic Physique class in Pittsburgh.

Everything was going according to plan. July 6th finally came and it was competition day for the NPC Universe. I felt confident that I was going to win but that day it was just not meant to be; I ended up placing 3rd in Bodybuilding. I was heartbroken- I felt like I had failed not just on stage but that I had failed my coach, the team, and most of all my family. I was sitting there in self-pity; but Adam then approached me and gave me a hug and said, “I’m proud of you”.

This prompted me to stop and really think about why I was so disappointed- 3rd place at Nationals is an amazing achievement. I still was a little heartbroken and called my mom and dad who always seem to make everything better. My parents were so proud I had placed 3rd- they have always been my biggest supporters.

I will continue to focus on growth, development and furthering my career in bodybuilding in the upcoming year. Bigger and better things are yet to come. In the rest of this article I will outline my nutrition and training in hopes that you too can emulate the results that I’ve achieved.

Here’s a typical pre contest nutrition day for me.

Before bed: I take 4 ZMA 2000 capsules to aid recovery

Cardio is performed daily on the stationary bike or treadmill for a duration of 45 minutes.