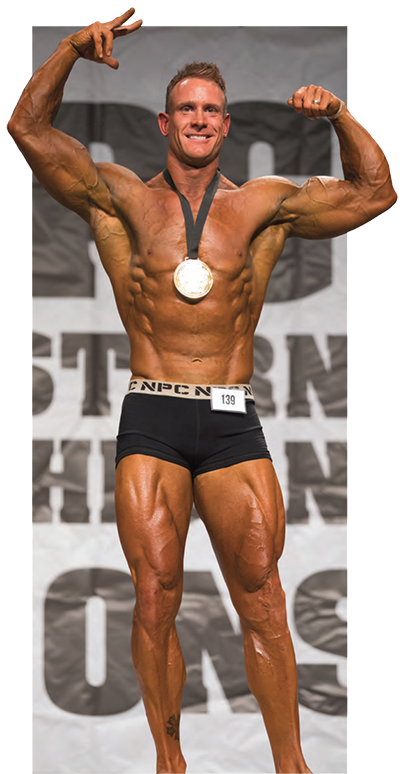 At a Glance: Doug DeRuyter

Family: Wife, Tracy and 3 kids, Jake, Owen, and Ella. Their support is endless and appreciated!!

Favorite Supplements: UMP, Mass Aminos, and Ultra 40 – I stay relatively lean year round so it’s vital for me to retain my muscle mass. I take 5 Mass Aminos and 5 Ultra 40 pre workout and post workout with my Muscle Provider as well with my other 6 meals. That’s right, 35 of each every day. I truly believe this combination not only helped me retain, but also build muscle and strength during contest prep!

Words to Live by: Success is no accident. It is hard work, perseverance, learning, studying, sacrifice, and most of all, love of what you are doing or learning to do! -Pele

I have been into sports and fitness my entire life! I grew up playing nearly every sport imaginable, was a high school athlete and was even recruited to run college track. Even to this day, as an elementary physical education teacher, I am teaching the importance of physical fitness and trying to set a good example for my students to follow!

I was a tall and skinny 160-lb sophomore in college when I first started lifting weights. Even though I had always wanted to be stronger and more muscular, I was intimidated by the gym. Fortunately, my roommate had a lot more knowledge than I did in that area and invited me to work out with him. I was reluctant at first, but it soon became part of my weekly routine. Slowly, I began gaining some muscular weight and strength. I found that I was beginning to love weight training! As my knowledge of proper training techniques and nutrition grew, that love continued to grow into a passion and lifestyle!

In 2002 I decided to compete in a couple of local bodybuilding shows. I ended up doing very well, taking the overall novice in one show and first in my class at the second show. I competed again in 2003; taking the overall open at one show and had two other first place finishes. I took a few years off from competing and then competed again in 2007. That’s when I decided to enter my first NPC show. I knew that I would have to come in better than ever. That’s when Beverly supplements became a huge part of my contest prep and daily training!

I came across Beverly supplements simply through research and decided to give them a try! I was impressed that they had been around for decades as well as the quality of their products! Like most people, I too have tried many different brands of supplements. I have bought into the hype of a fancy advertisement or label, but the end results were pretty much the same - minimal results. I now use only Beverly supplements because they truly give me unmatched consistent results! For my first NPC show, I used Mass Aminos, Ultra 40, Creatine Select, Glutamine Select, Super Pak, and UMP. I competed in the heavyweight division. Even though I was the lightest of the heavyweights, I still came in first place! I honestly believe that the Beverly Supplements gave me an edge in physique quality which the other competitors could not match.

As our family grew, I decided it was time to stop competing. I continued to train hard and eat clean. I started doing personal and group training beside my work as a physical education teacher. I enjoy being able to share my love of fitness with others and motivate them to meet their fitness goals!

The love of competing had never left and I was getting the “itch” to compete again. Being as tall as I am, 6’ 2”, and a hard gainer, I would classify myself as an ecto/mesomorph. Because of this, I started researching a new class in bodybuilding called Classic Physique. I felt with my conditioning and body style, broader shoulders and narrow waist, I would fit into this category much better than traditional bodybuilding. So in 2017 I decided to compete again in Classic Physique! Once again, without a question, I knew that Beverly supplements would be a huge part of my contest prep. I knew what products work for me as well as the results I could expect! I once again, used Mass Aminos, Ultra 40, Super Pak, Creatine Select, Up-Lift, UMP, and Muscle Provider. I had been using Quadracarn as part of my daily supplementation, and continued using this as well.

I entered the NPC Central States show in Ypsilanti, MI and won my class, overall masters, and overall classic physique! A few weeks later, I competed in the NPC Western Michigan Bodybuilding Championships. There I won the overall Masters and also won the open class C category! Both of these shows were national qualifiers, which now meant I could compete at a national show. Honestly, I never thought I would be competing at the national level, but with my recent success, I decided I would compete at the 2018 Teen, Collegiate, and Masters Nationals in Pittsburgh. I had eight months to prepare! I continued my exclusive Beverly only supplement plan trying to add as much lean muscle as I could, while keeping my diet relatively clean and strict.

My show prep for Masters Nationals was 14 weeks long. I felt I came into this show looking the best I ever have looked! I knew a clean diet and hard work in the gym were two huge factors, but again, I can honestly say the continued, and consistent use of Beverly supplements was also a major factor!

I wasn’t sure what to expect competing in my first national show! And boy, was I amazed at the number of quality competitors! National shows can have over 1000 total competitors, all bringing their best! I competed in the 40 and over age group in Classic Physique. Because of the high number of entries, I was in Class D; this was the height class with the tallest competitors. I was up against some quality competition! I ended up taking 4th place in class D, which was just 2 places away from earning my IFBB pro card!

I was extremely proud of what I had accomplished in my first national level show! However, being a competitive person, I know there is always room for improvement! So I will continue to train hard, eat quality meals throughout the day and continue to use Beverly supplements to reach that goal of earning my pro card!

Here’s a look at my nutrition and training programs at 8 weeks out from the contest:

Diet and Beverly Supplements 8 Weeks Out