As told to: Steve Colescott

It is traditional for winning athletes to retire; step away from the gridiron, court, field or ring; focus on other things. Then, given time, they find their mind questioning things: Do they have what it takes for another win? Are their best years behind them? Most of all, have they accomplished everything that they are capable of in the sport?

For natural bodybuilders like Frank LaGarde, the situation can be different. Taking almost a decade away from the posing platform, did not remove him from the gym. Bodybuilding is a sport in which 99% of the athletic performance takes place before the day of competition. LaGarde's nine-year break was not a retirement.

“In addition to getting married and moving, doing too many shows in a three-year period burned me out,” LaGarde says. “I also knew I needed time to put on some muscle since I was squeezing into the middleweight class (at six-feet tall).”

Natural bodybuilding requires time, even for those possessing good genetics. Frank LaGarde definitely has some genetic  advantages, including broad shoulders and a small waist. His V-taper exaggerates itself when he diets for a contest. “It's a gift and a curse. It helps you in bodybuilding but it is hard to buy clothes that fit you.” This is NOT a terrible burden.

Frank began lifting for basic recreational exercise after high school but he got serious in 1999, which led to him competing in 2000. “I went to a contest that one of my wife's college friends competed in and said, 'I can do that'”. Since Frank placed well in his early contests (and went on to win in the most of the ones he entered) he became hooked on competing. Here is a listing of his three hectic early years in the sport:

Prior to taking a break from competition, Frank had difficulty dieting down to the 176-pound limit of his weight class. Few things are as frustrating as whittling away hard-earned muscle mass just to weigh-in for a class victory.

During his nine-year break from competitive bodybuilding, Frank's focus outside of the gym had been on marriage and career. In the gym, he slowly added muscle onto his new light-heavyweight build. He now plans to bring up his calves and traps before looking for the next areas required for ongoing construction.

Frank works from 8:30 until 5:00pm as a Sales Rep for AT&T-Midwest in the Small Business Sales department. His co-workers respect his bodybuilding goals and the job fits in well with his needs.

After work, he returns home, gets something to eat or drinks a shake, and makes it to the gym around 7:15. After work, Frank trains at Pep Wahl's Body Builders Inc in Akron, Ohio. Body Builders Inc is one of the country's best (and most under-rated) gyms. Need to chalk your hands? No worry about having to clean up after yourself. Chalk boxes are positioned throughout the gym. Body Builders' has an uncommon “men only” rule. What might seem like an outdated rule insisted upon by the landlord 35 years ago, does have its benefit for those that train there. Lack of the fairer sex removes the need for gym clothes that match. You don't see men in custom-designed athletic footwear, $60 gym hoodies, or matching lifting belt-and-shoe combos. Heck, even a hairstyle flattened by the pillow is not uncommon here. The vomit buckets get used and hard work is typical, with powerlifters, bodybuilders and non-competition gym meatheads all training hard and driven by their own purpose...whatever it might be.

Frank trains solo and likes to hit each body part twice a week. His training takes between 90 minutes to two hours, so he is home by around 9:00. This gives him just an hour to relax with his wife, Jennifer, before wrapping up his day.

Frank's approach in the gym doesn't change much pre- or post-contest. As the contest approaches, he does go a bit lighter, slightly reduces the rest periods, and does high rep burnout sets (with maybe 15-20 reps). For example, his chest training may involve a heavy pressing movement followed by higher reps pec deck or flyes.

Why does Frank not make big changes to his training as a contest approaches? “I don't let my body composition get out of control.” Like other smart and dedicated lifters, his off-season condition does not become sloppy with some type of “bulking” strategy. “At the recent NPC Natural Northern USA, I came down from around 212-213 and competed around 180.” This contest (promoted by Dave Liberman) is one of the largest regional drug-free contests in the country so Frank's overall wins in both the Open Class and Masters Class show that he properly filled out his now light-heavy frame. This made his return to the stage a success:

So why did Frank LaGarde make the decision to contact Beverly International? “My initial goal was to maximize my potential in order to get the very best results when competing,” Frank says. He started reading the No Nonsense Newsletter around 2000, but didn't try the products until 2003.

“When I first started bodybuilding, I was not using Beverly. But I decided to give Beverly a try. I noticed that the people winning at the shows were being featured in the No Nonsense Newsletters as loyal Beverly supplement users. That was proof enough for me!”

“I've been using BI supplements for so long, I do not have anything to compare it to. I guess that's pretty good.”

“I first met Steven Wade at the Beverly booth at the Arnold Classic, I believe it was 2002. We talked about the different products, mostly the protein powders.” When Frank decided to begin using Beverly he sent an email detailing his goals, and Steven was the Beverly Advisor Team member who replied. The two men crafted a contest diet that he has been using to this day. “Why change, if it's working?”

Frank's use of Beverly supplements is very diverse. His favorite products include Ultimate Muscle Protein (UMP), Provosyn, and Quadracarn.

In his off-season, Frank takes one scoop of UMP and one scoop of Provosyn, two to three times daily. He also adds in four Ultra 40 tablets and four Mass Aminos twice daily, first thing in the morning and in the evening post-workout. For overall vitamin/mineral support, he has a Super Pak in the morning. To fuel his training, he has two scoops of Glutamine Select post-workout or three scoops sipped during training. He wraps his intake up with Quadracarn, three tablets, three times a day.

Like many successful bodybuilders, Frank's supplement intake makes minor increases as the competition approaches. This is to protect against muscle loss when calorie intake and metabolism are more strictly controlled. He increases his intake of Ultra 40 and Mass Aminos to four of each with every meal (five times a day). He increases this to a sixth dose of the two products as the diet continues. Beverly’s Creatine Select is added in to keep his muscles full of creatine when glycogen may be a bit low. The contest prep period also includes two Lean Out and four Muscularity with each meal. GH Factor is also included with six capsules in the morning and another six before bed. As a final support, Frank includes three 7-Keto MuscLean capsules in the morning, followed by a second similar dose in the afternoon.

“I didn't want to waste time with a lot of guess work and experimentation. Beverly has definitely helped me with that. They’ve helped me meet my goals...from the very beginning up until current day. Their input has always been on the money. Even after I took nine years from competing, Steven was still there to help me get back into contest shape."

Frank's praise of Beverly International goes beyond his own contest victories and reflects his early views of the newsletter (which has now transformed into the No Nonsense magazine). He likes BI “mainly because they use "real world" people such as myself, not just professional bodybuilders and fitness models, but regular people who have to be at work every day. I think that goes a lot further, when discussing real world results."

In life, real world results are the barometer of success. This involves goals taken beyond wishful dreams to becoming accomplished objectives. Frank LaGarde's impressive extensive list of contest victories demonstrate real world results. And now his profile in a Beverly article may serve to inspire more future champions to accomplish their own real world results!

On Mondays and Thursdays, I ate the following in place of my normal 6th meal:
1 ½ cups of oatmeal (measured before cooking) or 1.5 cups cooked brown rice, 10oz sweet potato, 1 banana, 1 cup vegetables, and 1 tablespoon butter

As mentioned before, Frank's training program doesn't change drastically between his pre-contest and off-season sessions. He attacks most body parts twice a week to encourage optimal growth. His typical workout each week breaks down as the following: 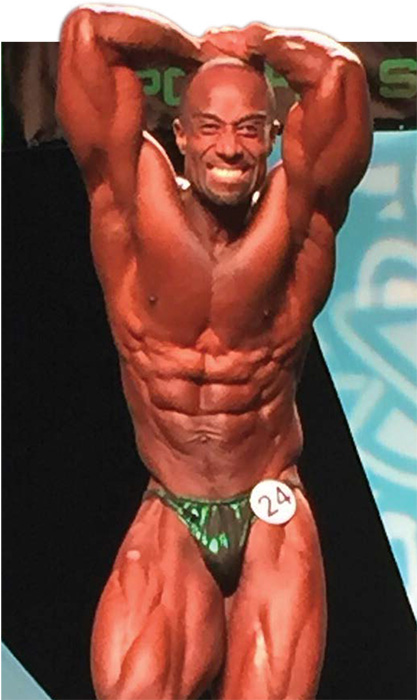