At a Glance: Cydney Gillon

Favorite Supplements: UMP and Density - I used both primarily while I was in track season to make sure I was able to recover and make sure I did not burn off muscle since my cardio level was so high. Density allowed me to maintain my lean muscle tissue.

Words to live by: "If you want to succeed as much as you want to breathe... then, and only then, will you be successful."

Cydney Gillon's life changed when she was six years old. Not by a choice of her own, but by one both of her parents made. Her parents (Skip and Tangelea) went beyond the decision to change their lives to be healthier. Both of them transformed themselves and stepped on the bodybuilding stage. Eating healthy became the way of living in her house. But this wasn't a choice that six year old Cydney agreed with.

“I started planning to get my junk food elsewhere, at school or at friend's houses,” says Cydney. “I had little restraint on what I would eat. So much so, I developed high cholesterol by the age of twelve. My cholesterol was so high that I would get sodium migraines and my doctor suggested I started taking medication.” Cydney's mother, who was already established as a daily user of Beverly products, decided against that. Besides her high cholesterol, Cydney consumed so much sugar that she developed very bad cavities. She knew it was time to change her lifestyle.

Cydney's childhood involved visits to the gym, an appreciation for discipline and hard effort, access to Beverly International products, and now an understanding that what you eat brings about ramifications. Much like her parents, her change was not a gradual one. She wanted to compete!

Cydney wanted to do fitness but did not have the gymnastic-based tumbling skills so decided to do figure. “The sparkle and the heels are what drew me to figure,” says Cydney. She wanted to compete at 13, but was discouraged by promoters. Since they had no teen classes she was directed towards novice, but insisted on the open class. One of the promoters told Cydney that she could do a show when she was 14, making sure she had some time to reconsider. Unlike most children, she had her mind set.

“When I was fourteen, I did my first show,” says Cydney.” “And that was all she wrote from there!” Eight years later, Cydney has competed in more than a dozen shows and earned her IFBB pro card. In addition to the support of her parents, she also inherited great genetics, including a narrow hip structure and broad shoulders. “Just add muscle to it and it gives me a V-taper.”

Through her scholastic career, Cydney also excelled at sports, particularly track. Her powerful legs made her a natural sprinter, which led to her becoming a varsity track athlete at the University of Pennsylvania. She graduated in 2014 with a Bachelor's degree in psychology.

Shortly after turning twenty, Cydney won the 2012 NPC Nationals. She has also placed in the top ten of all eight pro shows that she has competed in. This includes the Figure Olympia, where she placed ninth and eighth (2014 and 2015) and a ninth-place finish at the Arnold Classic-Figure International. Most impressively, she is the two-time Chicago Pro IFBB Wings of Strength Pro Figure champion.

She earns her living as a personal trainer, posing coach, and choreographer. Although young, her accomplishments allow her to motivate clients and pass on the knowledge for them to succeed.

Training is one of Cydney’s favorite ways to spend her time. She enjoys the struggle for improvement and overcoming the challenge of the weights. Pushing herself is what relaxes her. “The main thing I have learned in my years of training,” says Cydney, “is to pay attention to your body and know what works for you.”

Cydney lifts at least three times a week. She splits her body into three parts: 1) chest and back, 2) shoulders, and 3) hamstrings and quadriceps. She does not train her arms at all.

In the off-season, she spends about two hours in the gym in a typical session. As a contest approaches, she speeds things up and tries to finish within an hour. Her training varies, but here is one of her favorite intense workouts as follows: 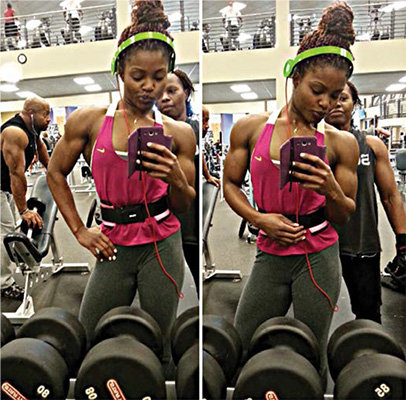 For cardio, Cydney likes to add sprinting to her routine. When she does this, she incorporates the workouts that coaches gave her in college. As an elite track athlete, she is able to recruit serious power when she runs. This type of explosive sprinting is difficult (but burns fat quickly). This forces her to cut her workout that day in half, to avoid overtraining.

Although Cydney’s arms are developed to the point where she no longer needs to do specific arm training, she recommends this workout for anyone who is starting to train for Figure or who needs to tone and/or tighten her arms.

If you are not able to do body weight pushups, push yourself to not drop to your knees. You want to give each rep a try, so do one and if you do not complete the rep, reset mentally and try again until you get to 10.

If you have absolutely no upper body strength in the beginning, complete a straight arm plank, with legs slightly separated. Hold your abs tightly, and relax into the plank with no arch in your back, for a count of 20 slow counts.

Eventually you can work your way up to a full push-up.

Cydney changes her diet depending on her condition and goals. Some of the basic principles of her current eating protocol include:

• She generally likes to eat six meals a day.

• To keep her metabolism up, she eats every two-and-a-half to three hours a day.

• Hydration is important. She drinks at least a gallon of water a day.

• Her diet is super high protein, moderate carbs, low fat, with lots of veggies for roughage.

For Cydney, a typical day's eating would be like the following:

“This year I worked on keeping more of a balance,” says Cydney. Even after a contest diet, her childhood junk food binges cannot be a part of a pro figure competitor's life. This is not acceptable if she wants to advance in the rankings. “I put together a plan in advance on what I was going to eat after the show, so I wasn't going to go crazy. I also chose a date in which I was going to get back on a stricter plan so that things didn't get out of control.” That is a realistic and wise strategy.

Due to her parents' influence, Cydney grew up with Beverly products. “Beverly is the only supplement line I have taken since day one. It has been a staple for my entire career. I will never go without it the rest of my life. It is going to be here to stay.”

Here are some of her favorite products:

Ultimate Muscle Protein: Cydney regularly consumes Beverly protein. “I used to be a protein shake lover, but I read in one of the Beverly magazines people talking about the pudding. So I had to try it out in pudding form, and I haven't had a shake since. I'm addicted to them! You have got to try mixing a scoop of chocolate with a scoop of strawberry!”

Density: Cydney uses Density three times a day to keep her body charged with high quality amino acids. “I take Density to make sure I maintain my muscle during hard workouts.”

Super Pak: She covers all her bases with a quality multi-vitamin and mineral combo. “After breakfast, Super Pak keeps my immune system on track. Without it, I don't feel as energized.”

Fast-Up: Cydney takes this to sharpen her focus, boost her energy and get the most from her training (without jitters). She recommends, “Take it pre-workout if you need a little more energy.”

As Cydney approaches a new competition season, her goal is to compete at the Arnold Classic and qualify again for the Olympia. Her long-term goal is to win both contests (and not just once).

"Having made it to the Arnold and the Olympia were big stepping stones for me," says Cydney. "The best of the best are there. It is an honor to be among them."

She has a unique situation as a top pro competitor. Although she is always the youngest in the show, she often has more experience than most in the lineup. Her future is bright as Cydney’s body continues to mature and she gets more experience in IFBB competition.

Success requires more than just training, nutrition, and supplements. A proper mental state is also important. To succeed, Cydney feels that you need to be secure in yourself and remain steadfast. “You can't let anyone's opinion let you falter from your goals. You need to press on. Life doesn't stop for your shows so you need to be resilient and bounce back from whatever is going on.” Success requires both strength and passion. Cydney Gillon has shown that she has both in quantity!