Competed in my first figure competition

At a Glance: Rachel Payne

Favorite fitness meal: Breakfast! Cream of wheat and a burger made with ground sirloin (no bun). Second favorite: orange roughy and asparagus.

In my iPod: Pittbull, AC/DC, Aretha Franklin, Daddy Yankee, with a lot of Salsa and Reggaeton

Favorite Book: Charms for the Easy Life, by Kaye Gibbon

Hobby or interests: My children

Shortly after I turned 45, I gave myself a hard look in the mirror and was very discouraged with what I saw. The size was ok and my weight was not a problem, but everything was soft and, very frighteningly, I could see the beginnings of "the mom butt." The tush had most definitely begun to droop. It was a sad day.

I said to myself, "Is this it? Is it just time to give up and let nature do its damage?" Turns out, it was not time to give up. Six months later I competed in my first figure competition, and came home with some hardware. That was a great day, and things kept getting better. Clearly, my fun as a figure competitor had just begun.

At the time of the sad day, I had recently been released to resume physical activity following 5 months of recovery from surgery. Prior to that time, as an adult, I had been very active with running, teaching group fitness and dancing. I did work out with weights as part of an overall fitness routine, but I was just guessing at what was right. I wanted to recover properly and see what I could do before I just totally gave in and invested in mom jeans So, for the first time ever, I contacted a personal trainer.

My goal was very specific, lift the booty. From the first training session, I was loving it and learning more and more. Very simple instructions at first: eat more, lift heavier. It was not long before I was seeing changes that propelled me on. Since high school, when I would go in and out of working out, I had always admired the women bodybuilding pioneers such as Rachael McLish and Lisa Lyon. (Yes, this would have been in the 80’s). Their bodies were beautiful and muscular and symmetrical. Reaching that level was always a far, far away impossible dream, one that I certainly did not think was attainable at 45.

Then, three to four months into the training, sometime in August of 2011, my fabulous trainer turned fabulous friend, Brenda Gabbard, commented that we should work to get me on stage. I gasped and tears welled up in my eyes. It was one of the nicest things I had ever heard and I jumped on it! "Really? Me? You think I can do that?" Yes, said she. We teamed up with another fabulous trainer and fabulous friend, Marie Gibbon, to train for the competitions and for me to learn to pose. We were off with a diet and workout plan to get ready for the NPC Monster Mash at the end of October 2011.

Following a trail of chicken, tuna, sweet potatoes, broccoli, asparagus, four thousand gallons of water, Beverly UMP, Lean Out and 7 Keto, my trainer and I made our way to Harrison, Ohio, for the Monster Mash. So many amazing bodies, beautiful suits, fancy shoes, and the earrings! My purpose there was to learn and to observe and to enjoy the process. Surviving the challenge of the pre-competition diet and all the other contest prep was satisfying in and of itself. It was a personal challenge simply to do the competition.

I was not nervous, or so I thought, partly because my expectations were not high and partly because walking across a stage was not a new thing for me. Having been a Theater major and dancer in college and a lawyer for a profession, I have performed a lot and have been in the hot seat many times. So, walking across stage and doing a few key poses, with no lines to speak, no songs to sing, no choreography to remember, and no client to represent, I thought the stage presentation was the easy part. However, when I got to the middle of the stage, I forgot which way to turn and which hip to hike up! I was a bit befuddled, but I made it through and just laughed at myself for my boo boos.

I did not expect to place and certainly not to win. Did not even know what "first call out" meant until I was backstage and someone told me I was in the first call out. I had thought they were being nice to let me try again because I was so clumsy the first time. To make a long story longer, yes, I was in the first call out for all three categories in that competition. I placed second in Masters 40+, second in Pure Novice and fourth in Figure Open Class A. I smiled from ear to ear for days following that competition, and I was ready for more. 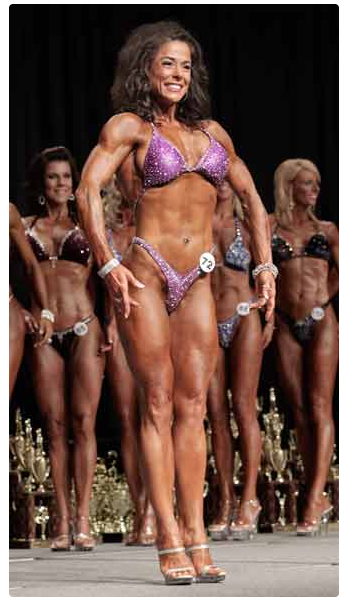 Supplements stayed the same through the competition prep until the last week or two prior. The staples of my supplements are always Beverly International products including 7 Keto MuscLEAN, Lean Out, Glutamine Select, GH Factor, Quadracarn, Energy Reserve, UMP and Muscle Provider. My favorite is vanilla UMP. That stuff is wonderful any time of day or night. I also include vitamin C, B-12, B-6, and a multivitamin.

I am looking forward to competing again in the fall in a few yet to be determined competitions. I don’t know what to do with myself if there is no diet plan on the front of my refrigerator. Even more so, I find that the discipline for competing carries over into the discipline to do my best with family and work. Once you become accustomed to that level of focus, it becomes a part of your life. I am 46 and with triceps as hard as a brick, I’m not going back.

Each competition was different and fabulous. By the time I would actually get to the competition, my objective was to enjoy the process, enjoy the people, and do the best I could. It is impossible to predict who is going to show up right next to you, so I saw no reason but to simply give all you’ve got and make it fun. I’m often the wacky one backstage, getting psyched and trying to make others smile with crazy dancing (as much as I can without disengaging the bikini bite!) and cracking jokes. Next time, join me, it’s good to smile and laugh before taking the stage. 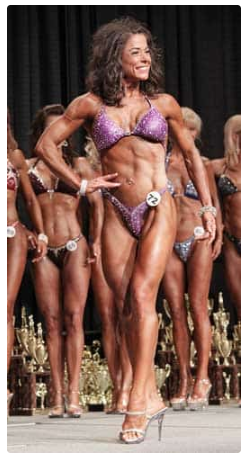 Posted in Most Popular.