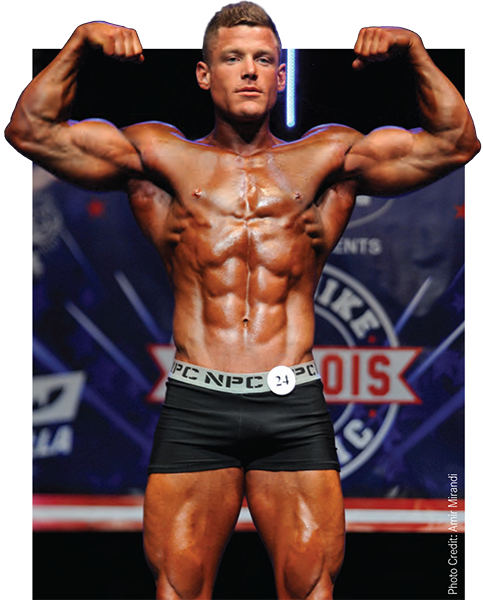 At a Glance: Andrew Reilly

Occupation: I work for my family at F.N. Sheppard & Co. as a conveyor belting fabricator

What would you recommend to someone who has never used Beverly supplements before? I always say this; UMP is the best protein on the market. It has the best taste, the best mouth feel, and the best consistency to cook/bake with. To the people in the gym who are looking to improve their workouts, or looking to add more mass, I always recommend Muscle Synergy.

Hobby or Interests outside bodybuilding: I love to eat and try new foods. I also enjoy going to the zoo, the movies, or just staying inside and being lazy.

Words to live by: “Strength does not come from winning. Your struggles develop your strengths. When you go through hardships and decide not to surrender, that is strength.” Arnold Schwarzenegger

My life changing journey into bodybuilding began my sophomore year at Eastern Kentucky University. I was working at the campus gym and many of the clients said that I should think about competing. So, after graduating, I decided to give it a shot. I stepped on stage for the first time at the NPC KY Derby Bodybuilding Championships and finished dead last! I’m sure many would have given up, but I only became more determined that the next time I stepped on a contest stage I would not only place, but win! The first step was for me to find a trainer to guide me in my quest.

After researching many trainers, I chose Dave Uhlman to guide my physique transformation at Team Elite. The first thing Dave did was make me take a good look at my nutrition. He explained that proper nutrition and supplementation would account for 80% or more of my ultimate contest success. Prior to working with Dave my meal planning and supplement intake was pretty random – whatever was being touted in the current magazines or internet posts. Dave also analyzed my workouts and created workout schedules that spelled out exactly what I needed to do. After working with Dave for 2 years I stepped on stage again at the NPC KY Muscle in 2017. This time I won my class! You can see a sample of my successful diet, supplement, and workout programs accompanying this article.

This spring I was in even better shape than at the KY Muscle. I had created a physique package that I was extremely proud of. Going in to the show I thought I would win for sure. But when I stepped on stage I was dwarfed by two of the other competitors. I ended up third, but couldn’t get the size of those two guys out of my mind.

In my mind, I felt like a loser and this drove me to take a risk that I came close to paying for with my life. I started researching online steroid sites. Ultimately, I purchased growth hormone from an underground site.

Almost immediately after I started on it I noticed that I was having trouble swallowing. I went to Urgent Care, but two days later I was unable to swallow at all, and when I tried, the pain was so excruciating that it brought me to my knees. My girlfriend, Sarah, took me to the hospital and after four hours in the ER that included a CAT scan, IV fluids, and Tylenol, they diagnosed my condition as Epiglottitis. This is an infection of the epiglottis and an ENT was immediately called in.

But just fifteen minutes after I was diagnosed, my airway completely closed and I was rushed to the OR for an emergency tracheotomy. While heading to the OR I coded, so they had to apply CPR for five minutes. I then coded two additional times during the procedure. I literally died three times! After hours in the OR I became septic. The doctor told my mother and Sarah to call my family and loved ones because the chances of me making it out alive were slim. I was finally stabilized at 4:30am and moved to the SICU where I was placed in a medically induced coma with paralysis, and put into a hypothermic state as a last ditch effort to save my life. After 24 hours of barely clinging to life, my body began to respond and I slowly began my recovery.

I’m not sharing this story to tell you how I beat death and have been given a second chance at life. I’m telling it to encourage you to not make the same mistake. The underground growth hormone was the cause of my trauma. The drug was contaminated which caused an infection, and the growth hormone cells then attached to the infectious cells causing severe epiglottitis and closing my airway.

I know that during our fitness journeys we hit plateaus, or get frustrated and begin to question the process and ourselves. But I want to encourage you to keep pushing, and to keep working as hard as you can. Good things come to those who work hard and don’t give up. Be proud of who you are, and what you have accomplished. I should have been proud of being in the best shape of my life at that last show, but instead I focused on the judges’ placings and the two guys that placed ahead of me.

I am now playing catch up with my body and fighting to recover. The advantage I was seeking ended up nearly killing me. I am blessed to have a second chance at life, but someone else may not be as lucky. Through this battle, I saw the pain I caused my friends and family, and no trophy or victory is worth the heartbreak that they endured because of my decision. But through that I also saw the love and support of those same people during the toughest time of my life and for that I am forever thankful. 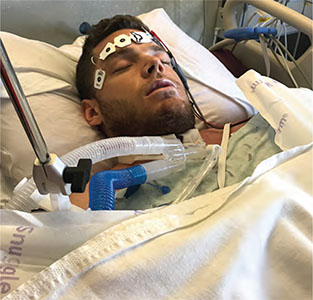 Ultimate Muscle Protein (UMP): As noted in my diet plan, I use as a morning on-the-go shake, pre-workout, and in the protein pancakes I make for my last meal.

Multiple Enzyme Complex: 1 tablet with every meal to enhance protein digestion in order to fuel my body for growth.

Mass Amino Acids: 4 tablets with meals 1, 2, 4, and 5 (16 tablets total per day) for muscle growth in the offseason, and to reduce muscle catabolism pre-contest.

To get ripped before a contest I add:

Lean Out: 2 capsules with each meal

7-Keto MuscLean: 3 capsules in the morning and 3 more with Muscle Synergy 35-40 minutes before my workout

I train 6 days a week. I love supersets and tri-sets to keep the intensity high and hit every angle of the muscle.

I do 30 minutes of fasted cardio at 5am on my stationary bike or elliptical. Helpful tip: it’s great to be able to wake up and just hop on your own cardio equipment – check out FaceBook Marketplace for someone who is trying to sell their barely used equipment. You can usually pick up a great deal and the equipment is like new.