By: Steve Colescott, The Guerrilla Journalist

At a Glance: Richard Acheampong

Family: 4th child out of 5 siblings including 3 boys and 2 girls

Favorite Supplements: It’s gotta be UMP. I mix 2-3 scoops and drink it sometimes as a shake and other times I make it as a pudding and add some fruits & almonds.

What do you recommend to your friends who have never tried Beverly: I let my friends try my ‘go to’ VANILLA UMP protein and their impressions after are priceless. Always great feedback!

Music: Hip-Pop from Jay-Z, Kendrick Lamar, J. Cole and many others! Always listen to music that pumps me up for my workout sessions.

Hobby outside bodybuilding: Family time, traveling if I have time, trying out new things.

Words to live by: “Every day is a true blessing from God. I’m always thankful.”

Richard Acheampong is a young bodybuilder that has only been training for a few years and just a year on stage. While his time in men's classic physique has not been long, the amount of contest prep experience, trophies earned, and (even more impressive) his well-shaped and lean balanced build, displays champion qualities. Most important, his mental attitude lists him as an athlete with future potential.

The fact that Richard was born in a west African country was always going to be a part of my interview, but I was learning that there was much more about this man that was going to be the major part of his story. His mental attitude, proper coaching, and driven nature definitely helped create him. So I had to look through his history to see how his growth as a person lead to this positive champion mindset.

“Ghana is not as developed as the United States, but it is a peaceful country,” says Richard who only lived there until his early teens. His father wanted a better place with less government corruption and greater career opportunities to provide for his family, so he chose to bring them to the U.S. After graduating from high school, Richard started going to a Planet Fitness near his house for something to do.

At six-feet tall, Richard weighed 160-pounds at the time. As the ancient lifters from my time learned from muscle magazines, when Richard started lifting, he learned as much as he could through YouTube videos. While I have seen some good and some TERRIBLE information in online videos, I always recommend this magazine, No Nonsense, for solid training and diet info from decades of successful bodybuilders.

After a couple of years, Richard moved to the more serious (and larger) Lifestyle Gym, where he currently acts as a popular trainer. A big change evolved two-years ago, by a meet-up with a well-known Buckeye bodybuilder named Todd Buchanan. Being someone that has always been impressed by Todd (both as a bodybuilder and a person), the first thing I noticed was a similarity in the physiques of both Todd and Richard. Having Todd as a coach, turned out to be a great decision.

“Todd has been awesome. We talked, became very close and he is like a father- figure to me. He talked me into doing a show and told me that I have potential. He helps me if I have any question on training or items life-related. He also introduced me to Beverly products.”

This guidance led Richard into what it took to do so well in his first handful of shows. His first contest was less than a year ago, with him winning the overall in the classic physique division of the 2018 Natural Kentucky. He made an impressive follow- up by winning the overall at the 2019 Mike Francois Classic, and second-place in his class at the 2019 Northcoast Championship and the 2019 Natural Ohio. In other words, he was a rookie that has the feel of competing in a single year that most bodybuilders only accomplish after closer to five years.

I got the following information from his mentor, Todd Buchanan. “Richard's physique is pretty balanced and he has amazing muscular density for the short amount of time he has been in the fitness arena. He definitely has full muscle bellies, a small waist and the overall pretty look.” As a classic physique athlete, this is as impressive a judgement as possible.

For Richard, training in the off-season involves at least five days a week in the gym and resting over the weekend. He trains at least two bodyparts a day. Monday is an upper-body push day, mostly chest and triceps. Tuesday is an upper-body pull day, directed towards back and biceps. Wednesday involves lower body training, posterior chain (hamstrings, glutes, lower back) being the main focus and wrapping up with some core work. On Thursday, he trains shoulders along with some more triceps work. Friday is a second back session with him using more machines and squeezing the lats while focusing on maximal contractions. Saturday is his second leg training session (heavier quad work in this workout).

“As I'm getting closer to a contest, I'm not focused on going as high in weight,” says Richard. “I go for higher reps, sometimes close to twenty. It is less about going heavy. It's about intensity and getting a good pump.” His sessions last only 45 minutes to an hour, but with short rest periods and some super-setting.

“I train every body part with equal intensity,” Richard adds. “I love training back and I love to train shoulders...but I'm not going to go in on leg day and not give it as much intensity.” “It burns like hell!” Richard adds as I question some of his training intensity techniques. “It's not every session but when I work out, I enjoy something where my muscle will be sore for a day or two, but that drives improvement!”

I dig deeper into Richard's training style, trying to hunt down some of his unique hypertrophy-based exercises. As we both get deep into a training conversation, he mentions lying cable lateral raises, some leg super-sets, with increased band resistance leg presses and tricks for greater back contraction. Many of these tricks came from his coach’s guidance.

As we spoke, I even mentioned an old training technique I learned twenty-five years ago from powerlifting coach Louie Simmons. This was from my first visit to an old version of his Westside Barbell Gym. It was a technique from when he trained bodybuilders Mike Francois and Jim Seitzer. Richard's reply said a lot. “Now that you told me, you have me visualizing and wanting to install that in my next workout. It's about thinking outside of the box and learning new things. It also keeps it fun to train!” His passion for pushing to another level again displays his champion mentality.

“I want to be better,” says Richard. “I know it takes months of overtime work to see change. Like everyone else, I've got to sweat it out. Wanting to get better and putting in the work is what it's all about.”

To close the article, I ask coach Todd for his prediction of where this athlete is heading. “I see Richard definitely as a Classic Physique pro in the near future... as well as a top placer in whatever shows he competes in. Keep an eye out for him. He has a big future!” 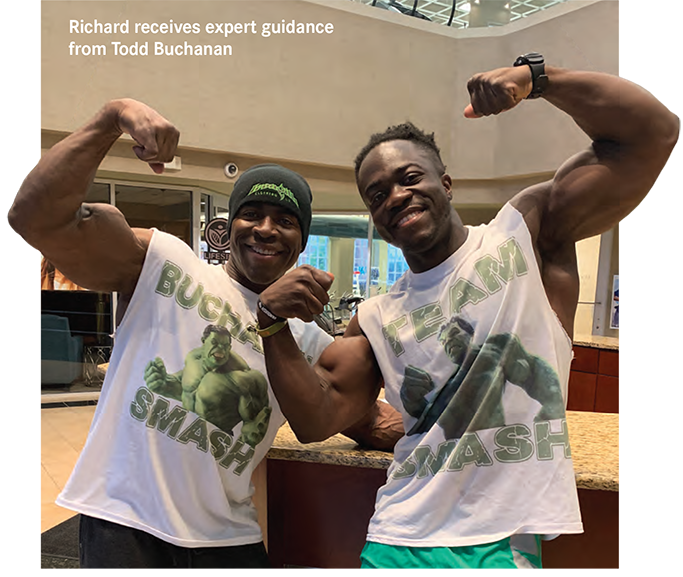 I asked Richard to go over his food intake with me. “I ate the necessary growth food when I started lifting,” he replies. “But when I started working with Todd, he gave me a more formal dieting plan. He listed what I needed to eat at each meal to get me prepared for the stage.”

“My breakfast includes 4-6 whole eggs, adding some veggies (spinach, peppers and onions) and maybe a piece of toast sometimes. I train in the morning, so this is about an hour and a half before hitting the gym. When contest prep is closer, toast is not included and it is more egg whites with one whole-egg included.”

“After training, I have some fish or chicken, sweet potatoes, and avocado. I like to eat four or five times a day (post-gym) to help recovery. As the show approaches, I cut the carbs down.”

“My third meal will involve three-scoops of UMP protein, and I add raw almonds with it and unsweetened almond milk. If I don't have much of an appetite, UMP is even more my go-to. I like the Vanilla and Cookies & Crème flavors. Sometimes I throw some peanut butter in my shake. It is awesome! I always have UMP for at least two meals throughout the day.”

His coach (Todd Buchanan) adds to the discussion of Richard's nutrition. “What I love about Richard is that he communicates everything about his prep with me. No changes are made without discussing them, with the final decision always being his to determine.”

“Beverly supps are his base, but he uses only what we determine is appropriate at the time,” says Todd. “Beverly's Quadracarn, 7-Keto MuscLean, Lean Out, Mass Aminos and Ultra 40 are staples.”

Richard adds, “I use all of them. With Mass Aminos and Ultra 40, I take 2-3 with every meal. With Lean Out, I take two with each meal. I take three Quadracarn, twice a day, and the same with 7-Keto MuscLean. When a contest approaches, 7-Keto really helps me a lot. It gives me energy on a low-carb day.”

Todd describes their use of OMAD (One Meal A Day) fasting to wrapping up Richard's contest prep. This is done, “one time a week in the last two to three weeks of prep to get super-tight! On that day we take Beverly free form amino acids – 5 Density and 6 Muscularity every 2-3 hours, instead of food meals. The fast is generally 20-24 hours long, ending with a high-protein, high- fat meal and a large salad or large amounts of veggies. Training includes lots of volume for all body parts.” This seems to have been very successful to Richard's shredded, paper-thin, stage dominance.

Daily Meal Plan at 6 Weeks Out from a Contest

I will do a refeed on Wednesday after legs and a cheat meal on Saturday post workout. A burger and fries until about 3 weeks out then I stop. I drink 1-1.5 gallons of H20 daily

UMP - used as part of my daily meal plan

Friday: Back (lighter weights with more squeezing and contracting) & Biceps