My Introduction to the Bodybuilding Stage
At Age 56! 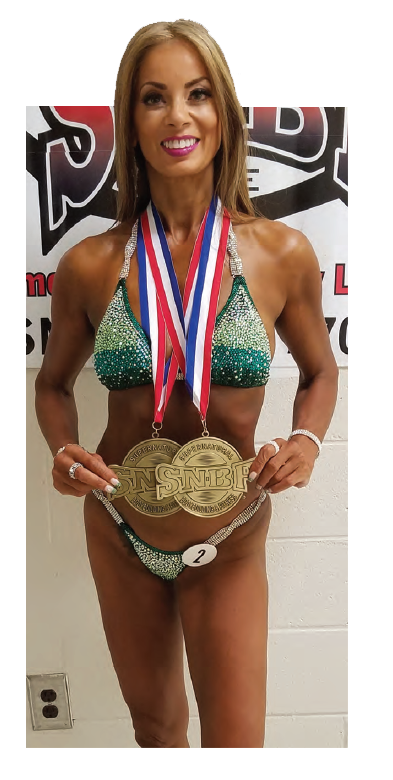 At a Glance: Brigitte Corneille

Favorite Supplements: Lean Out, Multiple Enzyme Complex and Energy Reserve are my favorites. Why? They’re perfect for me at my age to combat fat and stomach bloating. I don’t know what I would do without them.

What would you recommend to someone who has never used Beverly supplements before? There is no going wrong with the Super Pak. It is formulated for athletes, packed with vitamin C and B complex provides hours of energy, supports a healthy immune system, and let’s not forget the chelated minerals, digestive enzyme and antioxidants.

Music: All kinds really. Yes, opera, country, rock, techno, house, etc. It depends on my mood and what I’m doing.

Most Inspiring Book: I must mention two books I read in high school that have impacted my life: Albert Camus, La Chute (The Fall) and Andre Gide, L’Immoraliste (The Immoralist). I also must recommend Way of the Peaceful Warrior by Dan Millman, and to every woman, The Spiritual Rules of Engagement by Yehuda Berg.

Hobby or interests outside bodybuilding: Love to read and as a Sagittarius, traveling. I love people and culture.

Words to live by: “Live and let live” “Do unto others as you would have them do unto you” and a very meaningful quote to me by Henry Wadsworth Longfellow: “If we could read the secret history of our enemies, we should find in each man’s life sorrow and suffering enough to disarm all hostility”

Coming from France, I grew up eating fresh, wholesome homemade cooking. No need to worry about shelf life and preservatives were rarely, if ever, used. I didn’t even know what cereal was. The French even made their mayonnaise (although now, things are changing). Water (and yes, wine) was what we drank, and soda was a treat on special occasions. So living a balanced and healthy lifestyle was always a part of me.

For as long as I can remember, I’ve been active. Besides running around like all kids do, I played soccer, practiced judo, and throughout the years when I came to America, took up running, which became addictive. I started having problems with my back and knees, so I turned to cycling. I’ve also trained in barre, yoga, and then a friend invited me to a kickboxing class. It was there where I first learned about bodybuilding. When I was shown photos of the bikini competitors, I thought “Oh yes, I want to look like that.” I was then introduced to a coach who taught me not only how to properly lift weights, which I knew nothing about, but also helped me with my nutrition and introduced me to Beverly International.

Being a natural ectomorph (tall, lean, long limbs with a facility to burn body fat and a hard time to put on muscle mass), I always thought I was too skinny. I tried to put on weight, but when I did gain, it went to all the wrong places and I ended up truly “skinny fat” (see my before photo). So, when bodybuilding came into my life, I jumped at the chance to get into shape and set a goal of stepping foot on stage in a bikini. (A challenging thought, but one that would ensure I must stay the course.) The first challenge was to ‘deconstruct’ my body by removing all the fat.

I’m an early riser who wakes up at 3:30 a.m. every morning to meditate and pray. At 5 a.m., I’m at the gym for fasted cardio. I go home, eat and go back to the gym for my weightlifting workout. I love it! No need to push me or remind me. Although at the beginning, I was weak in doing lunges (weak is an understatement as I couldn’t even do one) nor do a bodyweight squat properly, I enjoy pushing myself to be the best I can be. But hard work pays off and in 15 weeks, my body changed. It was far from what it ought or could be, but I didn’t hesitate to step on stage as it was my goal and I would gain experience. I was not scared like many predicted and didn’t get a rush either as I was told. I did what I focused on and came out a winner for reaching my goal. The icing on the cake was my placings of 3rd and 4th at my first SNBF show and three weeks later, I placed 5th in another. I am in love with the sport and am in it to stay.

I am still very new to this sport and know it will take time to get the body I need to step on to an NPC stage, but that is my future goal. I am now preparing for another SNBF show later in the year. I am not stepping on stage to take home a prize, although that would be nice, but to show my body improvements.

I am truly blessed, and at the age of 56, I want to show the world, which is so used to instant gratification, that all is attainable with discipline, perseverance and the right attitude. No, you do not need steroids to build muscle after a certain age. I am proof. So, what are you waiting for? Join me and take that leap of faith. 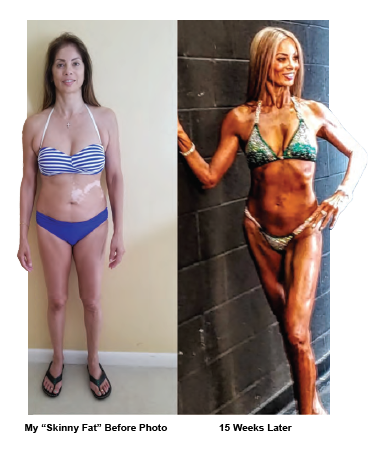 I keep my nutrition simple by using just one or two kinds of carbs, protein and fats. I’ve learned what types of food that my body responds positively to, and stick with them. For example, I’ve always loved sweet potatoes and respond well to them. Brown rice works okay during the off season, but when it comes close to competition, I remove it because it causes bloating. My proteins of choice are fish and protein shakes. During this off-season, I’m adding Mass Maker Ultra and UMP to gain quality muscle (especially important for an ectomorph like me). But when it comes close to competition, I keep things simple by limiting my protein to fish only. Yes, it means I have fish for breakfast, but it’s only temporary, right? For fat, I eat avocado and use olive oil. Water is also crucial. I am now able to drink one gallon, but the ideal would be more: a work in progress.

Growing up with a mom that wanted me to help her in the kitchen, I learned to use spices, which helps the taste buds especially when you eat fish five times a day.
I prepare each meal differently.

To give you an idea, here are the 5 pre-contest meals I currently eat:

Meal 3: 4oz fresh seared tuna. I combine in a bowl, salt, coriander, paprika and cayenne pepper then sprinkle the mixture on the tuna that I subsequently press all sides on a plate of black pepper. I eat it with a spinach salad made with tomatoes, red onions and black pepper dressed with ¹⁄₂ tbsp olive oil and rice vinegar.

Meal 4: Corvina (4oz) is a great fish for ceviche. I marinate the raw fish for a whole day or two (the longer you marinate the fish, the firmer the meat) in fresh pressed lime juice, with red onions that I salt and then wash to remove the bitterness, jalapeno peppers and black pepper. When ready to serve, I top it with tomatoes, cucumber and cilantro with spinach salad (see meal 3) on the side.

I take 2 Lean Out, 2 Multiple Enzyme Complex and 1 Energy Reserve with all five meals. At meal 1, I also take Super Pak, a daily multivitamin pack for athletes to help with performance, energy and immune system support and EFA Gold for my daily intake of healthy fats.
I cannot say enough about stacking Beverly International products like Lean Out, Multiple Enzyme Complex and Energy Reserve as the hardest part for me to lose was/is around my stomach. Lean Out helps convert carbs and fat into energy instead of storing them as fat. Multiple Enzyme Complex takes care of your bloating by helping with digestion, and Energy Reserve is your fat burning power as it contains L-Carnitine. I had just 15 weeks to complete my transformation and couldn’t have done it without them.

My coach is great at changing my workouts every week to hit different angles because “angles are everything” (his words), for variation so that my muscles are constantly challenged. My exercises consist of variations of Push, Pull, Leg training splits using different intensity techniques. I typically do 3 or 4 sets of 10, 12 or 15 reps or until failure.

Tuesday: Off (no weighs or cardio)

Here are a couple of examples of my current workouts:

During the off season I do 20 minutes of cardio six days a week using the stair climber, elliptical, treadmill and bicycle. At the beginning of contest prep I increase cardio to 30 minutes for the first 4 weeks, and increase it again to one hour the next 4 weeks. Then as my conditioning gets better and better, I reverse the process, going back to 30 minutes and then 20 minutes the last weeks before the contest. This is to prevent me from becoming too skinny and drawn.

Although we’re experiencing the coronavirus Covid-19 crisis, I am blessed to have a gym that I can work out in. As of now, my competition has not been canceled, but only time will tell. Canceled or not, I will stay the course and continue to train and eat right. So, until next time, y’all stay safe and healthy.