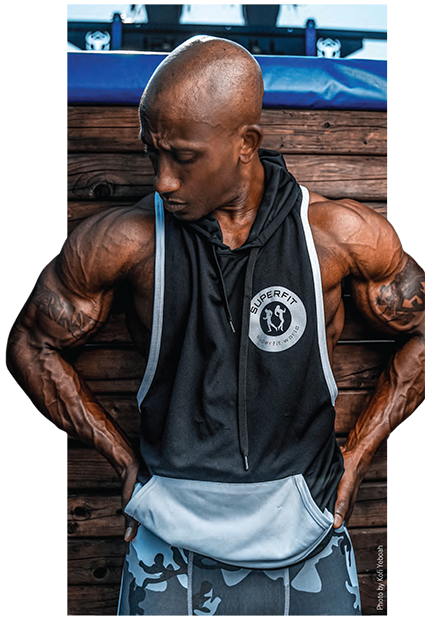 What would you recommend to someone who has never used Beverly supplements before? At a minimum, use UMP, Ultra 40, and Mass Amino Acids to aid the muscle building process.

Most Inspiring Book: The Alchemist by Paulo Coelho

Hobby or interests outside bodybuilding: Continuous education and reading

Words to live by: When they say it can’t be done, they’re not talking to me.

I ’ve been working out or playing sports for more than 27 years. While serving on active duty in the Air Force, I played intramural basketball, football, and softball. I currently serve in the Air National Guard as a Health Administrator. I enjoyed lifting heavy, but didn’t focus on bodybuilding until I finished Air Force Squadron Officer School.

Even then, I never really thought about competing until several people at Gold’s Gym in Newburgh repeatedly asked me if I competed. The answer was always, “No that’s not for me.” Then about two years later I saw a picture of some of the NPC Mens Physique athletes and thought I could remain natural and compete in that division. April of 2015 is when I decided to start prepping for my first show. I did an insane amount of cardio. I’m talking a minimum of 60 minutes a day. I didn’t win, but I did finish in the top 5. One of the judges asked me who my posing coach was and I told him, “YouTube”. The judges liked my physique but my posing needed work. Anyway, that’s how bodybuilding started for me.

I weighed 177lbs for that first competition in June of 2015. Over the next four years, I’ve managed to gain 15lbs of muscle through consistent training, proper nutrition, and the use of Beverly International supplements while remaining 100% natural. I learned about Beverly International when I was in the House of Nutrition in Poughkeepsie, NY. Matt, the owner put a No Nonsense magazine in my bag. Later that day I had a chance to read the magazine and read that the supplements were designed for natural athletes. I did some additional research, talked to Matt in depth the next time I was in the store, and ended up making my first Beverly International purchase.

I’ve always been and will always be a natural athlete. I’m also a NASM certified personal trainer, fitness nutrition specialist and prep coach. I’ve earned a pro card naturally in the IFBB using Beverly International products. As a prep coach, I have helped athletes win several shows as well. My goal is to inspire other athletes who want to achieve their ultimate level of fitness without compromising their health. 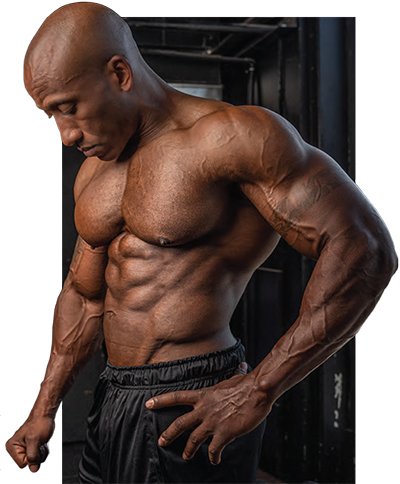 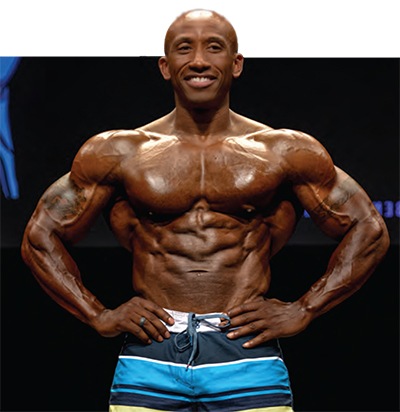 Initially, I took Matt’s recommendation, but over time have developed my own favorite stacks. The core supplements I use both on and off season are Ultra 40 and Mass Amino Acids. My favorite supplement for muscle growth is Muscle Synergy. The increased strength and muscle pumps from Muscle Synergy are undeniable. During contest prep GH Factor really brings out my vascularity.

Here are my favorite off season and contest prep stacks.

Ultra 40: 4-5 tabs after every meal or shake (muscle growth)

Lean Out: 1 capsule after every meal and before workouts (used to convert fat into energy)

I train twice a day during contest prep – cardio or abs in the morning with my weights workout in the afternoon.

On Monday, Wednesday and Friday mornings I do cardio - 30 minutes of low intensity stairs or walking on the treadmill at an incline (the greater the incline the more calories burned) – 2-minute warm up and 2-minute cool down for all cardio sessions.

On Tuesday, Thursday and Saturday I work abs and a little cardio: