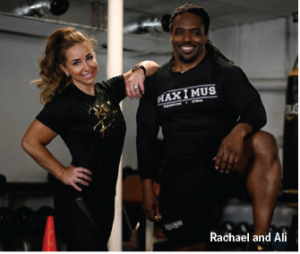 This is a cool story of how 2 trainers came to know each other… Beverly International’s products have been bringing athletes together for decades, but the unique bonds that are forged in protein powder and amino acids rarely get the highlight reel they deserve. That is until now. In a small town in Pennsylvania, two personal trainers have teamed up to bring their community the best that each of them has to offer, in a bootcamp experience that is likely to be the talk of the town and is a product of a shared love for Beverly International. Rachael Lattanzio has her Doctorate in Nursing Practice and is a certified personal trainer. Once a figure competitor, this now mom of two girls has found a way to make her passion for the fitness industry into a career by starting her own business, REL Fitness, LLC. Rachael has been using Beverly International products for more than 12 years. “UMP has been my tried-and-true protein throughout the last decade of my life,” says Rachael. “It’s been with me through competition prep and pregnancies. It’s the only protein I felt safe enough to consume while I was pregnant and breast  feeding and the only protein I’ve ever actually craved.” Rachael’s love for fitness and health is the driving force behind all she does and she has made it her mission to inspire women, men, and children to embrace the strength that is within us all.

Ali Johnson has been a personal trainer and coach long before he knew it was his talent. Even as a high school football player, Ali was the one coaching his friends through their workouts. After playing football at IUP and Millersville University, Ali tried out for the NFL and recollects, “I remember seeing Beverly International products in the locker room and asked the guys about it because I had never seen Beverly International before. They told me that it was the best, and that’s why you don’t see it advertised… just like you don’t see advertisements for a Rolls Royce.” As a teacher and high school coach for track and football, it wasn’t until a parent of one of his athletes offered to pay Ali to give their son some personal training that he realized he could truly put his gift to use by becoming a personal trainer. “At one point, I had so many other teachers and students asking for personal training, I didn’t have time for anything else”, says Ali. It was then that he decided to trust his instincts and started his own gym and personal training business, Max-I-Mus Performance and Fitness. As a loving father of 3 boys, Ali has a passion and deep appreciation for sharing his “gift” with not only the younger generations, but everyone he meets. Known as Mr. Max to his clients, he sees every day as an opportunity to chase greatness as a performance enhancement specialist.

Unique enough on their own accord, this dynamic duo is breaking down stereotypes and building a bond based on a mutual love and respect for fitness and their community… and of course Beverly International! Rachael relates, “I had a client who had a friend who was being trained by Ali. She told me that our training styles were very similar. Intrigued, I looked up Ali on social media and happened to see a post where he was endorsing Beverly International products. I knew in that moment that he was someone I had to meet.” This collaboration came at a perfect time as it marks the beginning of a venture for Rachael and a celebration of a decade of Max-I-Mus Performance and Fitness for Ali. Whether it was an act of God, or just Beverly International that brought these two together, one thing is for certain, their love for fitness and their community is going to inspire change around the world.