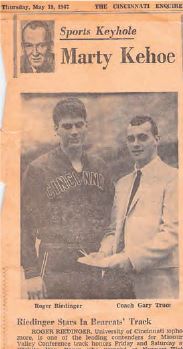 Just in case you didn’t know this bit of trivia, MY Husband, Roger Riedinger was an exceptional high school and collegiate athlete. He was an amazing discus thrower. Let’s stand and give him a big High Five!!!! He just made the HALL of FAME!!! Here’s the announcement from the Cincinnati Enquirer.

Roger Riedinger, Newport High School: He was a track star at Newport High School before track and field was divided into three divisions. He was a champion discus thrower for the Newport Wildcats and during a great 1965 season, he won every meet and event winning the KHSAA state discus championship when all schools were in one class. The three-time letterman was also successful as a bodybuilder, winning the 1985 AAU Masters Mr USA title, was a longtime school administrator and, after retirement, became the owner of a supplement business (Beverly International) he still owns today. He also coached track at Newport High School for 15 years.