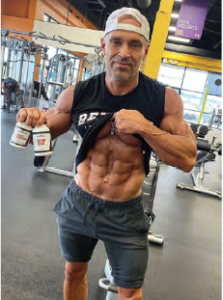 Ryan Stanton is a professional trainer, model, and avid Beverly user located in Bloomington, IN. He is currently preparing for a few shows in the fall of 2021 while preparing a full load of training clients to get in their best shape. Ryan’s contest prep/photoshoot ready stack is: UMP, 7-Keto MuscLean, Lean Out, Glutamine Select and Super Pak.

You may have read about him in a past No Nonsense Magazine where he was featured as an IFBB pro athlete.

Growing up he excelled in football and track and turned to bodybuilding in college. He’s been training clients for 20+ years and loves to help people change their life for the better!!! Here Ryan puts a spot light on one of his clients, Amanda Bolin. READ on!!!

As the saying goes, “It’s not how you start, but how you finish.” In the earlier stages of Amanda’s life, an athletic career did not seem to be in the cards. She was born with Ventricular Septal Defect (a hole in her heart). But following a successful open-heart surgery when she was just three years old, Amanda has not stopped. Her parents both encouraged a healthy lifestyle – her mom participating in sports growing up, and Aerobics and group fitness classes. And her father began competitive bodybuilding in the early 1980s and continues to compete to this date in the master’s division. Amanda started off participating in gymnastics, dance, softball, and basketball. She transitioned to cheerleading and cross country when she entered high school.

When she was 14 years old, her father took her to the gym and started lifting weights. There she was introduced to Rachel Wade, who was also training in the same gym. Rachel was her first role model and introduced her to the Figure division, as well as Beverly International. From that day forward Amanda wanted to develop a fit, shapely, aesthetic, and muscular physique.

Amanda went on to college, obtained an undergraduate degree in Exercise Physiology and a Master’s in Nutrition and Dietetics. Through the course of her college career, she continued weight training, running, and teaching group fitness classes. She enjoyed long runs on the weekends with her friends – it was a different outlet. Amanda started to run in half and full marathons – and qualified for the Boston Marathon, which she ran in 2014. 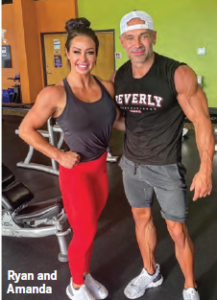 Whether in school, or moving for work to different states, her one constant to this date has always been weight training. In 2016 she entered the NPC Midwestern States in Fort Wayne, Indiana where she won the Overall. After some feedback from the judges, she went on to the NPC Jr Nationals and placed in the top 10, which she was thrilled by. From 2017-2019, she took the time to further develop her physique and entered the NPC Indiana State and won the Overall Title in 2019, which is shared with her father now who won Mr. Indiana in 1983. Again, taking almost another two years away from the stage, Amanda continued to train and work on her deficits. In May of 2021, she competed in the NPC Midwest Battle of the Champions and again took home the Overall Title.

Ryan says, “I have enjoyed working with Amanda the past year because she understands that the sport of bodybuilding requires time, attention to details, and a healthy body.” When it comes to a healthy body – Amanda is ever so committed to a sound nutrition plan, nutrient dense whole foods, and supplements of the highest quality to fill in the gaps. This is where Beverly International comes in. She has been a Beverly Believer and fan since her introduction to weight training at age 14. While supplements may change pending the season, here are her staples:

I hope Beverly International readers will cheer Amanda on to the finish line on the national stage in 2022 in her pursuance of IFBB Pro status.